Bob Baffert suspended from racing in New York for one year 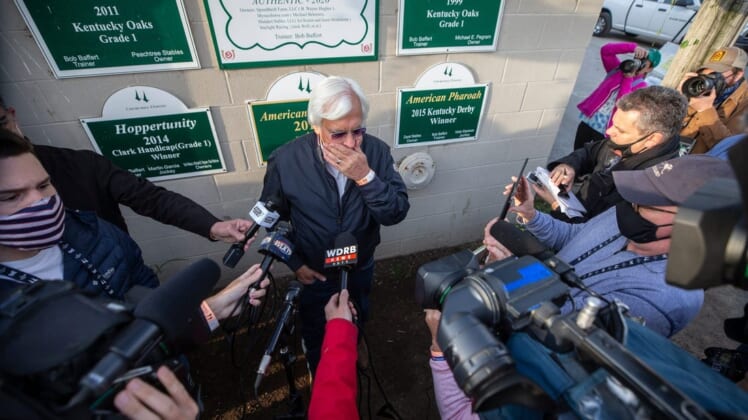 Hall of Fame trainer Bob Baffert had his proposed two-year suspension from racing in New York decreased to one year on Thursday for multiple medication violations.

A three-person panel appointed by the New York Racing Association issued the ruling. Baffert is allowed to resume racing horses in New York on Jan. 26, making him eligible to participate in the Belmont Stakes next year. The panel is giving Baffert credit for time served from an initial ban.

NYRA’s discipline against Baffert prevents him from racing at Saratoga Race Course, Aqueduct Racetrack and Belmont Park. The suspension cannot be appealed.

“This was an impartial and deliberative process that has resulted in a lengthy suspension of the sport’s most prominent trainer,” Dave O’Rourke, NYRA’s president and CEO, said in statement. “However, this is not simply about Bob Baffert or any one individual but about protecting the integrity of the sport here in New York. Today’s decision advances that goal.”

A two-time Triple Crown winner, he is permitted to compete in next year’s Preakness Stakes in Baltimore but remains banned from Churchill Downs in Louisville, Ky. Baffert was suspended by Churchill — site of the Kentucky Derby — through 2023 after Medina Spirit tested positive for drugs and was stripped of the victory in the 2021 Kentucky Derby.