Bo Nix accounts for six scores as No. 8 Oregon rolls past Cal 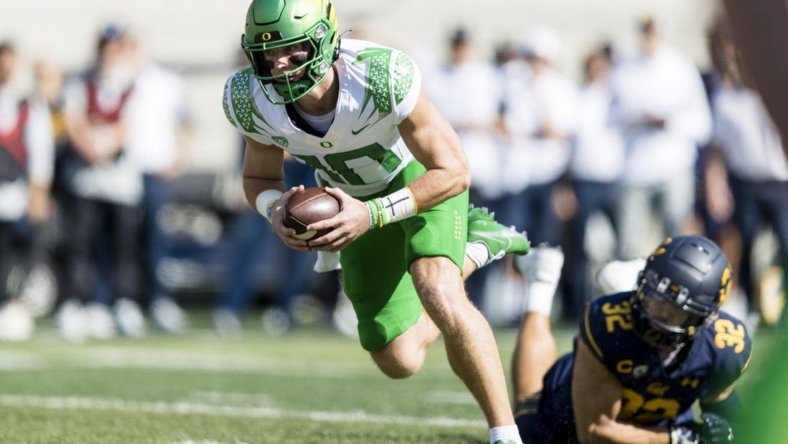 Quarterback Bo Nix accounted for six touchdowns, three on the ground and three with a 412-yard passing assault, and eighth-ranked Oregon routed California 42-24 on Saturday afternoon in Pacific-12 play in Berkeley, Calif.

Nix threw 12 yards to Bucky Irving, 29 yards to Noah Whittington and 40 yards to Patrick Herbert, while also running in from the 4 and twice from the 1, lifting the Ducks (7-1, 5-0 Pac-12) to a seventh straight victory after an opening loss to Georgia.

Oregon has topped 40 points in all seven of its wins.

The Auburn transfer finished 27-for-35 passing, and fell 16 yards shy of the career-best 428 yards he put up in September against Washington State. He was intercepted twice.

The three-TD rushing game was his third of the year and increased his season total to 11. He totaled 59 yards on 12 carries.

Whittington was the game’s leading rusher with 66 yards on 10 carries, and also hauled in a team-high five passes for 67 yards, helping the Ducks outgain the Golden Bears 586-402.

Seeking to end a three-game losing streak, Cal (3-5, 1-4) led twice in the early going, first after a Dario Longhetto 28-yard field goal that opened the scoring, and a second time at 10-7 on a 6-yard TD pass from Jack Plummer to J.Michael Sturdivant in the second minute of the second quarter.

Oregon then scored the next four touchdowns, two on Nix runs and two on Nix passes, to make it a runaway at 35-10 early in the fourth period.

Plummer went 20-of-33 passing for 214 yards with two interceptions before giving way to freshman Kai Millner, who threw his first two collegiate touchdown passes in the final 7:38. Monroe Young hauled in the first from 11 yards out, before Justin Richard Baker capped the day’s scoring with a 55-yard reception.

Millner wound up 8-for-11 for 114 yards, giving the Golden Bears 328 passing yards in the contest.