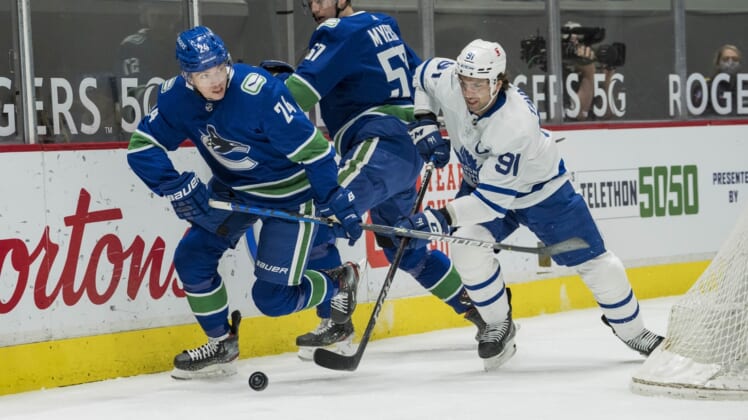 Bo Horvat scored his second goal of the game at 1:19 of overtime to lift the Vancouver Canucks in a 3-2 comeback win against the visiting Toronto Maple Leafs on Sunday.

The Canucks, who were playing their first game since March 24 because of a severe COVID-19 outbreak that continues to leave them short-handed, rallied from a 2-0 deficit.

William Nylander returned from a five-game absence and contributed a goal and an assist, Auston Matthews also scored, and Jack Campbell made 21 saves for Toronto (28-12-5), which came in with a three-point lead over the Winnipeg Jets for first place in the North Division.

Campbell has lost three straight starts after setting an NHL record by winning his first 11 to start the season.

Hoglander tied the score 2-2 at 12:03 of the third period when he put in a rebound that was left in the crease.

Nylander, who was in isolation following COVID-19 exposure, scored the first goal for the Maple Leafs, the 100th goal of his NHL career, taking advantage of a turnover by the Canucks in the neutral zone.

John Tavares passed the puck ahead to Nylander coming down the left side, and he took a slap shot from the right circle that hit the net for a 1-0 lead at 3:45 of the first period.

Matthews made it 2-0 with a power-play goal at 14:57 of the second period, driving to the net and flipping the puck over the right shoulder of Holtby.

Matthews, who increased his NHL-leading goal total to 33, missed the previous game with a nagging hand/wrist injury.

Horvat cut it to 2-1 at 16:23 of the second period, bringing the puck down the left side and snapping a wrist shot from the left circle.