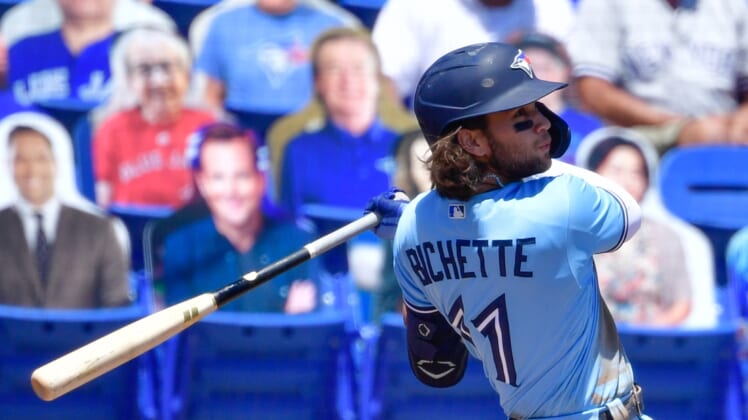 Bo Bichette’s second home run of the game led off the bottom of the ninth and the Toronto Blue Jays defeated the New York Yankees 5-4 on Wednesday afternoon at Dunedin, Fla.

Bichette, who also had a single and is on an 11-game hitting streak, hit his fourth homer of the season against Chad Green (0-2). It was Bichette’s second career walk-off homer against the Yankees.

Alejandro Kirk added a two-run homer for the Blue Jays in the rubber match of the three-game series.

Rafael Dolis (1-0) pitched a perfect top of the ninth to pick up the win.

The Blue Jays have won four of six games from the Yankees this season.

The Yankees had not scored a run in the first inning this season until Judge hit a 3-2 cutter over the left field wall with one out.

The Blue Jays took the lead in the second. Rowdy Tellez singled with one out and Kirk hit a hanging slider to left for his first homer of the season.

Bichette, whose first-inning single extended his hit streak, led off the third with his third home run of the season.

Judge led off the fourth with a towering blast to center, his fourth homer of the season. Brett Gardner walked, Gleyber Torres doubled, Gio Urshela hit a two-out, two-run single and the Yankees led 4-3.

Jonathan Loaisiga, who replaced Kluber in the fifth, loaded the bases with none out in the sixth when he allowed singles by Lourdes Gurriel Jr. and Tellez and hit Kirk with a pitch. Josh Palacios forced Gurriel at home on a grounder to first. A wild pitch allowed the tying run to score.