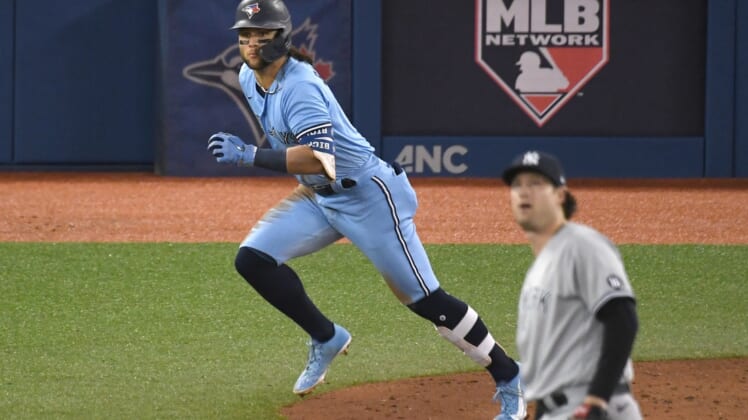 Bo Bichette led off the eighth inning with his second home run of the game, snapping a tie and leading the Toronto Blue Jays to a 6-5 win over the visiting New York Yankees in Wednesday night.

The Blue Jays (88-70) and Yankees (90-68) have split the first two games of a crucial three-game series in the American League wild-card race.

New York holds a one-game lead on the Boston Red Sox (89-69) for the first AL wild card. Toronto and Seattle (88-70) both trail Boston by one game for the second AL wild card, pending the Mariners’ late result against the Oakland A’s.

Bichette’s 28th homer of the season, to right-center against Clay Holmes (8-4), who had just entered the game, ended New York’s seven-game winning streak.

Toronto’s Marcus Semien set a major league record for second basemen when he hit his 44th home run of the season, a two-run blast in the first inning.

Yankees starter Gerrit Cole gave up five runs and nine hits while striking out six and walking none in six innings.

In the second, Santiago Espinal doubled and Springer singled to increase Toronto’s lead to 3-0.

Bichette homered in the third.

Berrios did not allow a baserunner until Gleyber Torres yanked a double down the left field line with two outs in the fifth. Gio Urshela followed with an RBI single and Brett Gardner hit an RBI double, cutting the deficit to 4-2.

Springer’s routine pop to left dropped between fielders for a leadoff double in the bottom of the fifth. He scored from third when Vladimir Guerrero Jr. ended a 0-for-20 drought on a ground-ball double past a drawn-in infield.

New York answered with a run in the sixth when DJ LeMahieu doubled and later scored on Aaron Judge’s sacrifice fly.

The Yankees tied the game at 5 in the seventh. Tim Mayza hit Joey Gallo with a pitch, and Torres hit an infield single to third. The runners moved to second and third when pinch hitter Luke Voit struck out on a wild pitch. Kyle Higashioka hit a two-out, two-run single.

Adam Cimber (3-4) retired all four batters he faced for the win.

Jordan Romano pitched around a single in the ninth to earn his 22nd save.