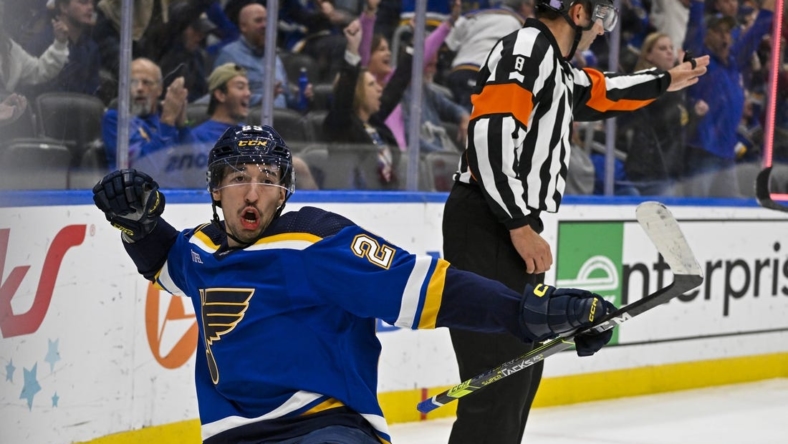 Calle Rosen scored the winning goal and added an assist as the St. Louis Blues snapped their eight-game losing streak with a 5-3 victory over the visiting San Jose Sharks Thursday.

Timo Meier, Tomas Hertl and Logan Couture scored for the Sharks, who are winless (0-2-3) in their last five games. Kevin Labanc and Erik Karlsson had two assists and Kaapo Kahkonen made 28 saves.

Krug put the Blues up 1-0 just 2:30 into the game by scoring from a sharp right-side angle. Justin Faulk triggered the scoring play with his outlet pass to Krug, who worked a give-and-go play with Brayden Schenn to get his shot.

Meier was credited with the tying goal with 3:41 left in the first period when Faulk tried to knock down a bouncing puck at the right post but batted the puck into his own net instead.

Kyrou drew a second-period Sharks penalty with a semi-breakaway. Then Kyrou converted the power play opportunity by banging in Buchnevich’s cross-crease pass to the right post to put the Blues up 2-1.

Hertl tied the game 2-2 by corralling the rebound from Labanc’s shot from the right side.

Saad scored to restore the Blues’ lead at 3-2 with 1:52 left in the second period when Josh Leivo set him up with a pass from behind the net.

The Sharks applied heavy pressure to start the third period and Couture tied the game 3-3 by deflecting Karlsson’s pass off the right boards.

The Blues reclaimed the lead 4-3 with Rosen’s blast from the left point off Thomas’ pass back from the end wall. Acciari iced the game with an empty-net goal with 19 seconds left.