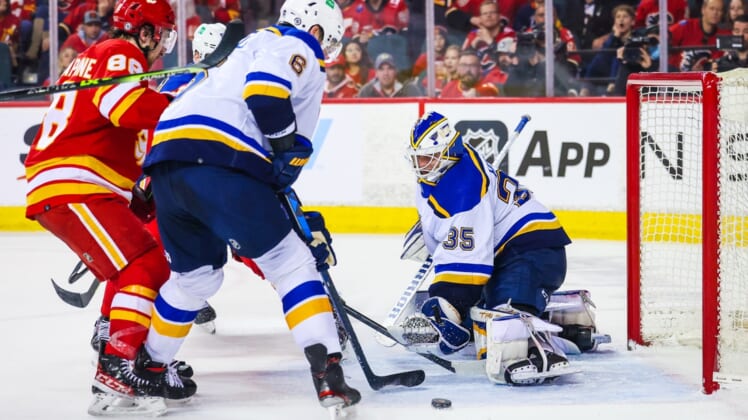 The St. Louis Blues will look to tighten their defensive play when they host the Arizona Coyotes Monday to open a four-game homestand.

“There was probably some fatigue involved, but the guys battled,” Blues coach Craig Berube said. “That’s the biggest thing I take out of it. It was a real gutsy win by us. You come into this building on a back-to-back night, you better battle. And you better have a gutsy win. Because that’s a very good team over there and they just keep coming. It’s four lines. They just keep coming.”

The Blues earned seven of a potential eight points against Vancouver, Edmonton and Calgary after pulling out of a 3-6-3 funk. But Berube expressed concern his team allowed the Flames to put 43 shots on goal and get several scoring chances in front of the net.

“I think early on we gave up too many point shots,” Berube said. “Their (defense) pounded a lot of pucks. We didn’t get in shooting lanes enough. And then we weren’t strong enough around our net. A couple of their goals we were a little loose. They got three goals tonight in tight around our net. You gotta get dirty and mean there. That’s the bottom line. You gotta knock people down, be heavy.

“I don’t like giving those goals up. We gotta do a better job of blocking shots.”

The Blues are in third place in the Central Division while last-place Arizona (22-42-5, 49 points) has been eliminated from playoff contention. St. Louis has split its first two games against the Coyotes, winning 7-4 on the road on Oct. 18 and falling to them to 3-2 on Nov. 16..

Arizona is coming off a 3-2 overtime victory over the Blackhawks Sunday in Chicago. The Coyotes bounced back after falling to the Anaheim Ducks 5-0 Friday at home.

“I don’t think anybody was happy with how the last game went, especially being at home too,” Coyotes forward Travis Boyd told Bally Sports after the game. “We had a good couple of days as a team, kind of hit the reset button. We just had to get back to what makes us successful. I don’t think we played that way the other night.

“I think tonight was a lot better. Obviously we got the result, but even if we didn’t get the result in overtime it was still a good team game.”

Ville Husso (19-6-5, 2.45 goals-against average) has emerged as the lead goaltender for the Blues. He relieved Jordan Binnington Friday and earned the victory Saturday.

The Blues hope to get forward Jordan Kyrou back for this game. He missed the last three games due to a non-COVID illness. Forward Logan Brown also missed Saturday’s game due to illness.

The injury-diminished Coyotes lost All-Star forward Clayton Keller to a broken leg. They have 10 players on their roster who started the season in the AHL.

Karel Vejmelka started in goal for the Coyotes Sunday, so they may come back with Josef Korenar — who stopped 26 of 28 shots in relief of Vejmelka Friday.