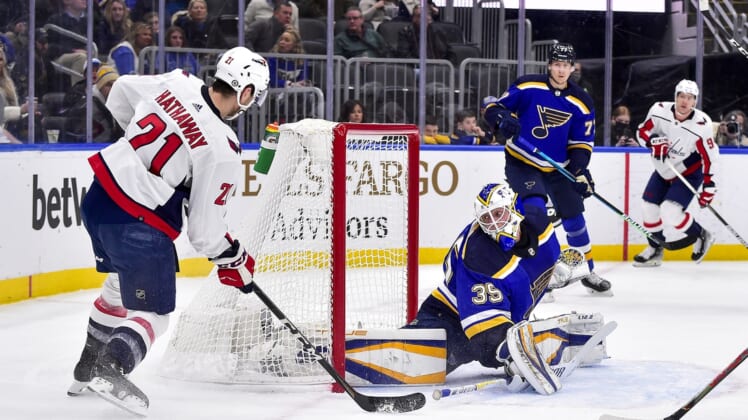 Oskar Sundqvist, Ivan Barbashev and Torey Krug also scored for the Blues and Ryan O’Reilly had two assists. Ville Husso made 26 saves to earn his victory in his first start since Dec. 7.

The Capitals earned a 3-on-1 rush less than 2 minutes into the game, but Husso slid to his left to stop Brett Leason’s tap-in. But seconds later Sprong took a pass from Aliaksei Protas and fired a shot through Blues defenseman Robert Bortuzzo from the right circle to put the Capitals up 1-0.

The Blues tied the game 1-1 at 12:10 of the first period. Robert Thomas doubled back on the right wing and fired a cross-ice pass to Krug cutting in from the left point to score.

Buchnevich scored from the slot to put the Blues up 2-1 at 9:08 of the second period. Marco Scandella set up the goal by jumping up into the play to take O’Reilly’s pass and feed Buchnevich from the left circle.

Sundqvist made it 3-1 with 2:40 left in the second period by converting the rebound off Justin Faulk’s blast from the right point.

Then Barbashev scored in the final second of the period to push the Blues’ lead to 4-1. Consecutive drop passes by O’Reilly and Buchnevich off the rush created his opportunity in the high slot.

With Capitals goaltender Zach Fucale pulled for an extra attacker on a power play, Buchnevich iced the game with his short-handed, empty-net goal.