Blues push past Wild to even series 2-2 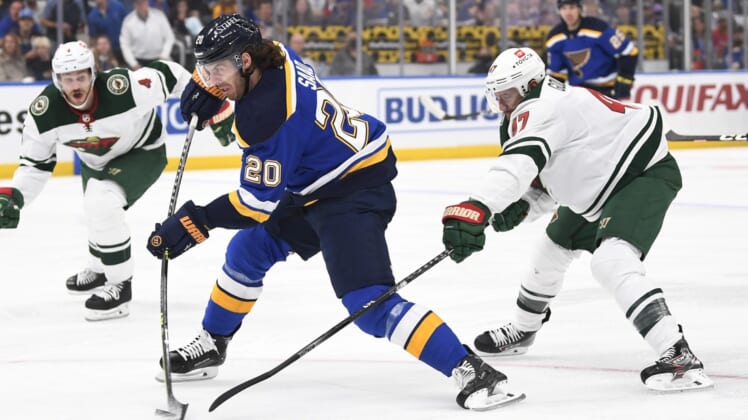 Jordan Binnington made 28 saves and snapped his nine-game postseason losing streak as the St. Louis Blues defeated the visiting Minnesota Wild 5-2 on Sunday to even the first-round playoff series at two games each.

Binnington, who replaced Ville Husso as starting goaltender, earned his first playoff victory since Game 7 of the 2019 Stanley Cup Final.

Jordan Kyrou and David Perron each scored two goals and Ryan O’Reilly had a goal and two assists for the injury-depleted Blues.

Kirill Kaprizov and Matt Boldy scored goals for the Wild, while Marc-Andre Fleury made 29 saves.

Defenseman Marco Scandella also played, but he lasted just 1:34 before exiting the game with a lower-body injury. He missed the first two games of the series while injured before returning in Game 3.

The Blues built an early 14-3 shots advantage in the opening period and took a 1-0 lead after Pavel Buchnevich found Kyrou breaking through the slot. Kyrou fired a shot, got his own rebound and scored.

The Wild followed a 4-minute penalty kill by tying the game 1-1 with 5:54 left in the period. Jared Spurgeon fed Kaprizov in the slot for his fifth goal in the series.

Despite getting out-shot 18-5 and out-hit 11-6, the Wild escaped the first period with a 1-1 tie with the help of three penalty kills.

The Blues scored twice in a 54-second span of the second period to take a 3-1 lead. First Perron cut to his backhand and shoveled a shot through Fleury. Wild forward Marcus Foligno stepped in behind Fleury but failed to keep the puck out.

Then Kyrou broke in, cut to his backhand and beat Fleury cleanly.

Minnesota cut the lead to 3-2 with 17:21 left to play when Boldy scored during a goal-mouth scramble. But Perron’s empty-net goal with 1:28 left clinched the victory and O’Reilly tacked on a power-play goal with a minute remaining.