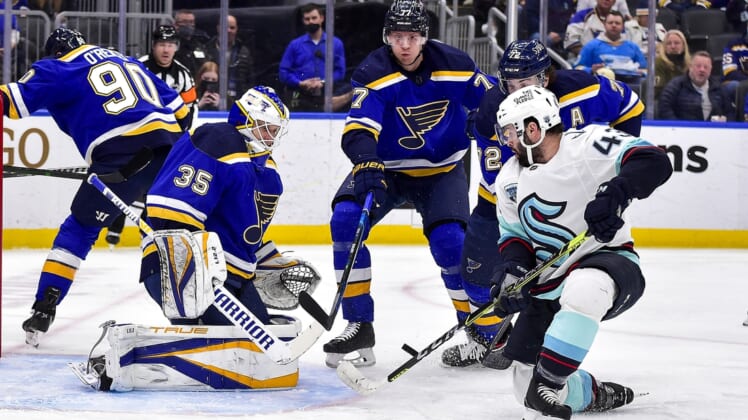 Pavel Buchnevich scored the decisive goal in the third period as the St. Louis Blues rallied past the Seattle Kraken 2-1 Thursday to extend their home point streak to 13 games.

Robert Thomas also scored and Ville Husso made 31 saves for the Blues, who are 12-0-1 in their past 13 home games.

Alex Wennberg scored for the Kraken, who are 0-7-1 in their past eight games.

They Blues prevailed despite playing without key forwards Vladimir Tarasenko, David Perron and Brayden Schenn along with defensemen Colton Parayko and Scott Perunovich due to COVID-19 protocol.

The Kraken outshot the Blues 15-8 in the first period while taking a 1-0 lead.

Ryan Donato created the scoring opportunity by coming out from behind the net with a backhand power move. Husso stopped the jam shot, but the rebound kicked out to Wennberg, who converted at the 15-minute mark.

The Kraken killed off three penalties in the second period while maintaining their 1-0 lead.

Seattle forward Joonas Donskoi had a short-handed breakaway midway through the second period, but Husso denied him with a left skate save. With 1:15 left in the period, Jordan Eberle got a point-blank shot in the slot, but again Husso made the save.

The Blues tied the game 89 seconds into the third period. Brandon Saad drove to the right post, then slipped a cross-cease pass to Thomas for his weak-side goal.

Buchnevich put the Blues up 2-1 with a power-play goal at the 5:30 mark. Jordan Kyrou hammered a one-time shot from the left circle, and Ivan Barbashev slid the rebound back to Buchnevich in the slot for the goal.

The Kraken went on a power play with 2:15 left in the game, creating the opportunity to pull Driedger for a six-on-four opportunity, but the Blues survived a late goalmouth scramble.