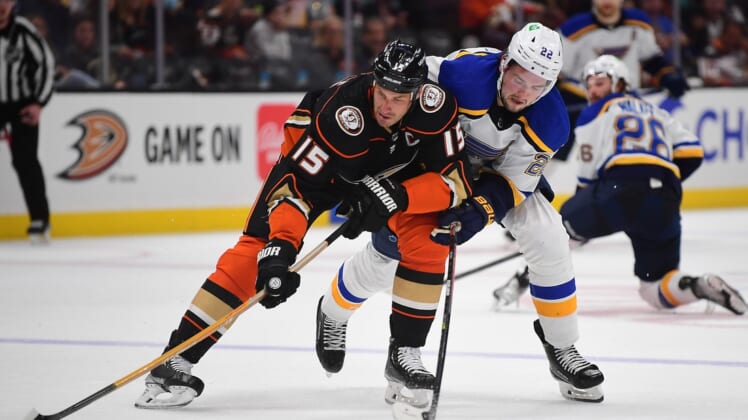 John Gibson made 31 saves while taking the loss.

Mayhew left in the third period with a left leg injury after getting hit by a slap shot. Robert Bortuzzo exited after two periods with an undisclosed issue.

The Blues controlled the first period while outshooting the Ducks 12-3, but they fell behind 2-0.

After Blues winger David Perron fired a shot off the left post, the Ducks countered to score on their first shot. Vinni Lettieri set up Comtois driving to the left post on a 2-on-1 break.

The Ducks made it 2-0 on Mayhew’s slap shot from the right point.

The Blues rallied in the second period with four unanswered goals. Kyrou fired a shot that was going wide, but it hit Henrique as he tied up Tyler Bozak.

The Blues tied the game with another lucky break. Niko Mikkola moved in from the left point for a slap shot. The puck popped up and caromed off Tarasenko as he drove the net.

The Blues moved ahead 3-2 when Bozak, who missed the previous 20 games with a lower-body injury, fed Barbashev for a tap-in at left post.

Faulk made it 4-2 with a one-time blast from the top of the left circle.

In the third period, Buchnevich scored off the right wing, and Scandella scored from the left circle.