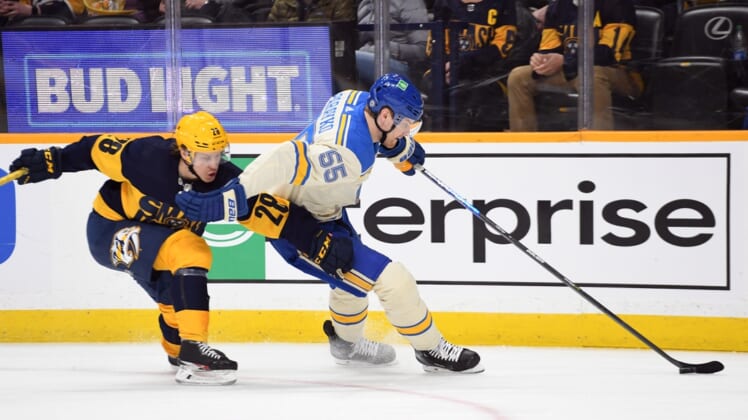 Robert Thomas’ second goal of the day broke a tie with 2:38 remaining in regulation, and David Perron also scored twice, as the visiting St. Louis Blues overcame blowing an early three-goal lead to cool off the Nashville Predators with a 7-4 victory on Saturday.

A brilliant pass from Jordan Kyrou, on his third assist, found Thomas to easily beat Nashville’s Juuse Saros (28 saves) and snap a 4-4 tie. Perron, who has seven goals in six games, and Justin Faulk added empty-netters as the Blues won back-to-back games following an 0-3-1 rut.

Matt Duchene recorded his fourth two-goal game in the last five, and added an assist, while Ryan Johansen recorded one with two assists for the Predators, who were roughed up after outscoring their opponents 14-2 to win the previous three games.

Nashville recorded the game’s first five shots on goal, but St. Louis struck first. On the power play, Perron ripped the puck in from the near circle at the 6:35 mark of the game. Less than a minute later and off a Nashville turnover, the puck found St. Louis’ Brandon Saad, who skated through traffic to beat Saros. Saad picked up an assist when Thomas made it 3-0 via another power-play score with 2:18 left in the opening frame.

The Predators, though, scored with 1:26 remaining in the first. Following a Blues’ turnover, Duchene converted off some tic-tac-toe passing with Johansen and Filip Forsberg.

Nashville made it a one-goal game with a power-play goal just 3:44 into the second period. Duchene placed the puck perfectly for Johansen to drill a one-timer past St. Louis’ Ville Husso (31 saves). The Predators tied it at 3-3 through Forsberg, off a three-on-three pursuit with 11:46 to go in the middle frame.

St. Louis, though, stopped the bleeding by taking the lead with 8:22 left in the second. Torey Krug drove the puck off a pair of Nashville players, before trickling by Saros.

But just 39 seconds later the game was tied again. Duchene used some nifty stickwork to beat Husso with his career-high 31st goal.

Thomas, who also had two assists, has recorded two goals in back-to-back contests.