Blues, Lightning to meet, both coming off tough losses 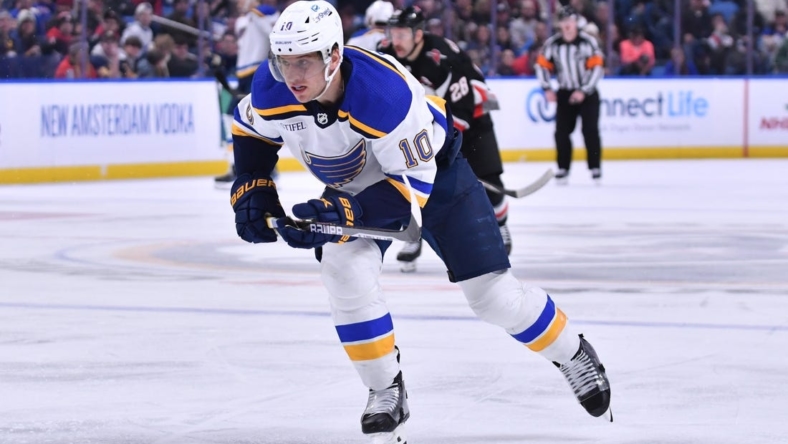 With his club having a light week on its schedule, Tampa Bay Lightning coach Jon Cooper likely had time to stew a bit over a 5-3 loss to the NHL’s top team, the Boston Bruins, on Monday night.

Fortunately for Cooper, he and his squad can return to their home rink Friday night and have post-Thanksgiving seconds when they host the St. Louis Blues.

Against the Bruins, who had opened the season 16-2 going into the game, Tampa Bay started fast on a Nicholas Paul goal, but the visitors matched it later in the first period. In the second, the Bruins scored three times and overwhelmed Cooper’s team, which had won four straight games.

“Penalties, turnovers, a little bit of structure,” Cooper said of his club’s issues. “In the end, they weathered a little bit of our storm in the first period, and they get out of the period 1-1. Then they throw us their storm and it’s 4-1.

“There’s the difference in the game. … That’s why they’re an elite team in the league: It doesn’t go their way, they kept it together and stuck with it. When it didn’t go our way, we didn’t handle it that well.”

In his postgame press conference, Cooper fielded the session’s first question by being asked what it was like to be a part of Patrice Bergeron’s 1,000th career point, which resulted in a Bruins mob celebration.

It was awkward question to ask of the losing coach, but Cooper was gracious in addressing the milestone and the play of the 19-year veteran captain of the Atlantic Division rival.

“I actually didn’t want to see it tonight,” Cooper said with a slight grin. “But if you’re going to tell me we’re going to lose the game, I’m glad I got to actually witness it live. I’ve coached against that guy for a lot of years, lot of battles and playoffs, and he’s a helluva kid. I’ve gotten to know him over the years.

“You cheer for him and you marvel at all these years how he can still be an elite player.”

Meanwhile, the Blues experienced something two nights later that was unusual lately: losing.

St. Louis had won seven straight games since their last loss, 5-1 in Philadelphia on Nov. 8, a defeat that dropped them five games under .500 at the time. But the Blues’ winning streak ended in Buffalo, as they were overwhelmed 6-2 by the Sabres to start their three-game Eastern Conference road swing.

In a hint of what could be a physical matchup in Tampa, Blues coach Craig Berube said his club failed to play its game in the four-goal blowout.

“We didn’t check hard enough,” said Berube. “They’ve got some real good skill over there, and they exposed us with it tonight, like beating our guys one on one. It happened too many times tonight.”

St. Louis forward Brandon Saad (non-COVID illness) missed the matchup, but defenseman Torey Krug was back after a one-game absence and posted a minus-3.

The Blues and Lightning will complete their two matchups on Jan. 14 in St. Louis.