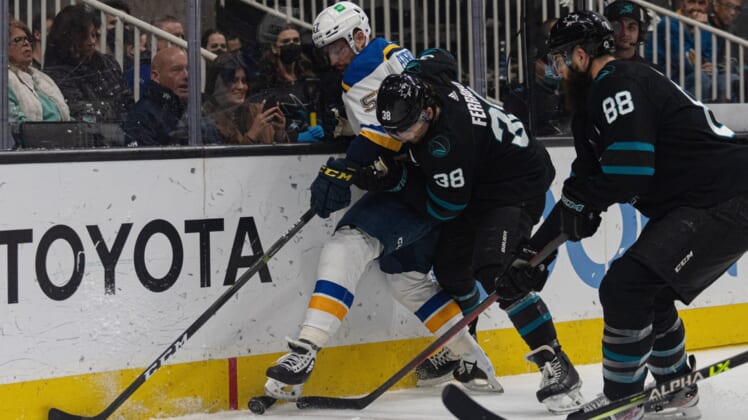 Robert Thomas scored the go-ahead goal as the visiting St. Louis Blues extended their point streak to 14 games with a 3-1 victory over the San Jose Sharks on Thursday.

The Blues (47-20-11, 105 points) have gone 12-0-2 during their club-record streak to keep pace with the Minnesota Wild in the race for second place in the Central Division. The Wild also have 105 points after defeating Vancouver 5-3 Thursday night, but Minnesota has played one fewer game than the Blues.

Dakota Joshua and Pavel Buchnevich also scored for the Blues and Jordan Binnington made 20 saves.

Gregor gave San Jose a 1-0 lead 3:05 into the game. He took a lead pass from Rudolfs Balcers and beat Binnington with a low shot between his pads.

But the Blues tied the game a little more than two minutes later with their fourth line. Logan Brown made a between-the-legs pass from behind the net to set up Joshua’s goal from the slot.

The Blues moved ahead 2-1 with a power-play goal 31 seconds into the second period. Vladimir Tarasenko got the puck from Buchnevich at the left point, then fed Thomas for an open shot from the right circle.

Thomas extended his point streak to 15 games; he has eight goals and 19 assists during that span. Buchnevich (12 games) and Tarasenko (eight games) also extend point streaks on that play.

Logan Couture and Gregor earned short-handed scoring chances on a San Jose penalty kill late in the second period, but neither could convert for the game-tying goal.

The Sharks had good scoring chances in the third period, but Binnington stopped Nick Bonino from the slot and Matt Nieto on a short-handed break-in. Then Buchnevch iced the game with an empty-net goal.