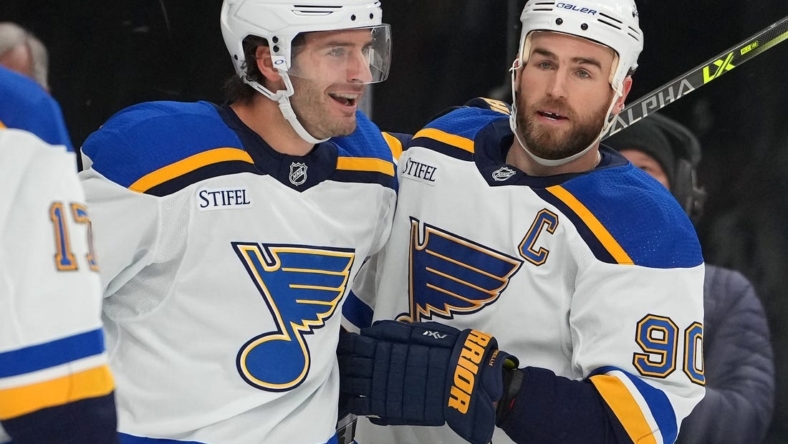 Jordan Binnington made 34 saves, including 22 in the third period, as the visiting St. Louis Blues held on to end the Vegas Golden Knights’ nine-game winning streak, 3-2, on Saturday night.

Binnington improved to 7-1-3 in his career against the Golden Knights. Ryan O’Reilly had a goal and an assist, and Brandon Saad and Ivan Barbashev also scored goals for St. Louis, which won its second straight game following a team-record eight-game losing streak.

Reilly Smith and Phil Kessel scored goals for Vegas, which lost for the first time since Oct. 22 when it fell to the Colorado Avalanche. The Golden Knights were attempting to tie their franchise record of 10 straight wins, set April 9-28 2021.

Adin Hill finished with 25 saves to suffer his first loss in six starts this season.

The teams traded goals during the first period. Saad gave St. Louis a 1-0 lead at the 9:47 mark with his second goal of the season, firing a wrist shot from the left circle over the right shoulder of Hill.

The Golden Knights took a 2-1 lead at the 2:43 of the second period, when Kessel’s routine wrist shot from inside the blue line squirted through Binnington’s pads for his third goal of the season.

But St. Louis rebounded to take a 3-2 lead later in the period with two goals over a 40-second span.

The first came after a miscommunication between Hill and defenseman Nicolas Hague while trying to clear the puck by the right side of the net. Brayden Schenn stole the puck from Hill and fed Barbashev, who slid a shot into the left side of the net for his second goal of the season.

O’Reilly followed with his third goal of the season and what proved to be the game-winner, one-timing a shot from the bottom of the right circle under the crossbar. It was his 11th career goal against Vegas, tying Anze Kopitar of the Los Angeles Kings for most goals by a player against the Golden Knights.

Vegas finished with a 36-28 edge in shots on goal, including 22-5 in a scoreless third period.