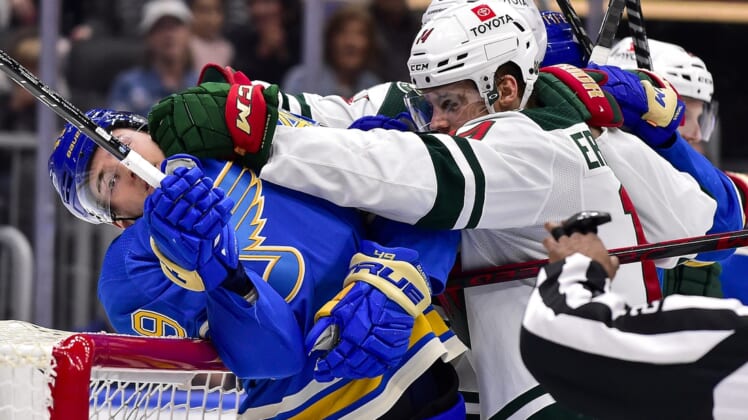 Brayden Schenn scored the overtime winner and had two assists as the St. Louis Blues edged the Minnesota Wild 6-5 Saturday to clinch a playoff berth.

Pavel Buchnevich had a goal and two assists for the Blues (45-20-10, 100 points), who passed the Wild for second place in the Central Division.

The Blues scored at least four goals for their 11th straight game. They are 10-0-1 during that span with eight consecutive victories.

Ryan Hartman had two goals and an assist for the Wild (46-21-7, 99 points), who erased a 4-1 third-period deficit to force overtime and earn a point. Frederick Gaudreau and Kirill Kaprizov also scored, and Cam Talbot made 24 saves.

Blues defenseman Nick Leddy left the game after taking a high stick in the face and Wild forward Tyson Yost left the game with a lower-body injury,

The Blues led 1-0 after one period. Barbashev scored by following up Nathan Walker’s attack.

Hartman tied the game 1:19 into the second period after corralling a bouncing puck in front of the net.

But Tarasenko answered with his 250th career goal off Parayko’s cross-crease pass. The Blues made it 3-1 when Perron converted Schenn’s diagonal pass.

Saad made it 4-1 on a clean break-in off Ryan O’Reilly’s lead pass.

The Wild killed off a 5-on-3 power play to close the second period and open the third before rallying.

Hartman’s second goal came on a pass tipped in by Blues defenseman Marco Scandella. Gaudreau scored 92 seconds later to pull the Wild within one goal.

Buchnevich responded with a 4-on-4 goal, but Foligno’s power-play goal cut the lead to 5-4 with 6 minutes left.

But Schenn decided the game in overtime by scoring from the slot off Buchnevich’s pass from behind the net.