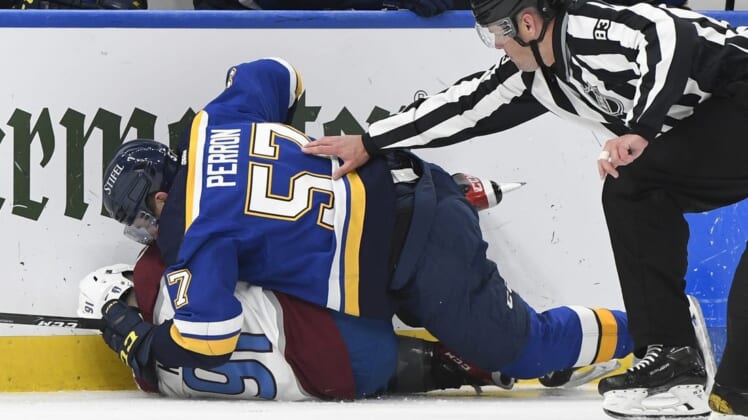 St. Louis Blues forward David Perron was fined $5,000 for the crosscheck he delivered to Colorado’s Nazem Kadri during Monday night’s Game 3 of the Western Conference playoffs.

The incident occurred at 5:30 of the second period when both Perron and Pavel Buchnevich went after Kadri. Perron was whistled for crosschecking while Buchnevich was hit with a roughing penalty. The play ended with Perron tackling Kadri to the ice.

The Avalanche failed to score during the 5-on-3, but Kadri scored his second goal shortly after the power play expired.

Perron whiffed on a flying elbow he apparently attempted to hit Kadri with while Kadri was celebrating that second goal.

Kadri finished with a hat trick.

Tensions with Kadri have boiled over after he was involved in an inadvertent hit on Jordan Binnington earlier in the series. Binnington is out for the rest of the playoffs with a lower-body injury.

Kadri has received death threats over the incident, resulting in a boost of security in St. Louis at the team hotel and arena.

Perron was hit with two crosscheck penalties in Game 3, the other coming on Cale Makar.

The Avs lead the series 3-1. Game 5 is Wednesday night in Colorado.