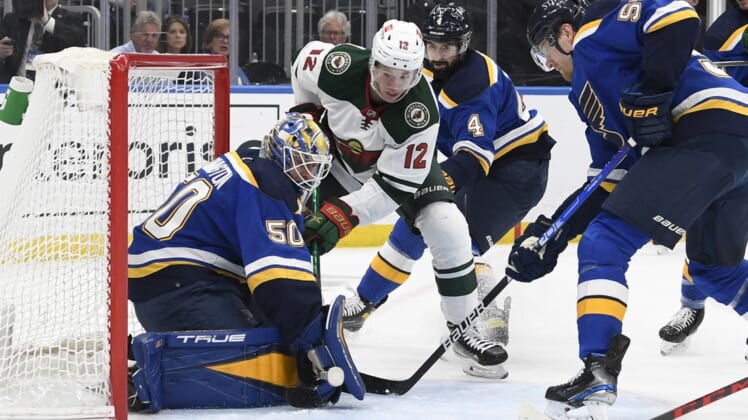 The Blues advance to the second round to face the Colorado Avalanche, who swept them out of the playoffs last season in the first round.

Matt Dumba scored for the Wild and goaltender Cam Talbot, making his first start in place of Marc-Andre Fleury, made 22 saves.

Key Wild forward Joel Eriksson Ek left the game in the first period after teammate Dmitry Kulikov accidently clipped him in the mouth with his stick. Eriksson Ek missed much of the second period before returning with a full facial shield.

The Wild controlled much of the first period while outshooting the Blues 10-4. But the Blues killed two off two penalties and took a 1-0 lead when Leddy zig-zagged up the ice and snapped a shot through Kulikov and past Talbot.

Minnesota had multiple scoring chances in the first 20 minutes but couldn’t break through. Marcus Foligno hit the left post during an extended flurry, and Binnington stopped Frederick Gaudreau’s clean break-in.

With 23 seconds left in the period, Matt Boldy came from behind the net for a stuff attempt, but he was denied by Binnington.

O’Reilly put the Blues up 2-0 with a power-play goal 9:26 in the second period. Brayden Schenn fed O’Reilly in the near slot for a point-blank shot.

Bozak made it 3-0 by following up Alexei Toropchenko’s power move to the goal and tapping in the rebound. Tarasenko increased the margin to 4-0 with a power-play goal with 1:24 left in the period on a back-door cut through the right circle.

Dumba got the Wild on the board with a slap shot from atop the left circle with 13:35 left to play. But Parayko iced the game with an empty-net goal with 1:41 left.