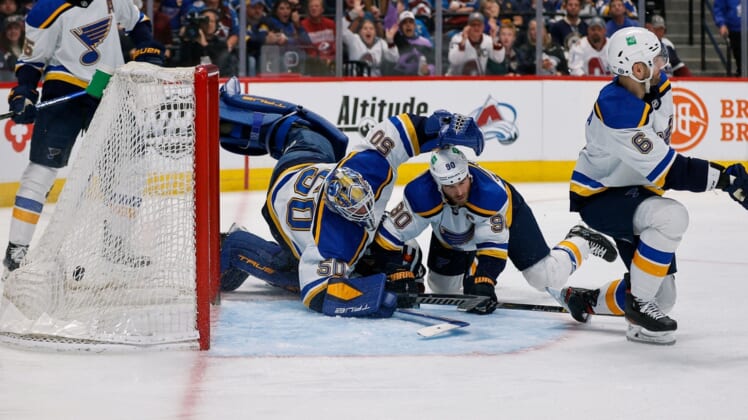 The St. Louis Blues will have home-ice advantage in the playoffs on their mind when they play host the Vegas Golden Knights on Friday in the regular-season finale for both teams.

The Blues (49-21-11, 109 points) are set to face the Minnesota Wild in the first round of the Stanley Cup playoffs, but the seeding is still to be determined. Both teams have 109 points, but the Wild play both Thursday and Friday.

St. Louis can claim second place in the Central Division by finishing level with Minnesota on points, since it holds the tiebreaker with more regulation victories. Gaining home-ice advantage may be a critical edge in what should be a tight series, as the Wild and Blues have been two of the NHL’s hottest teams over the last two months.

Following a scoreless first period, the Central Division-champion Avalanche broke out with three goals in first 8:03 of the second period to take a lead they never relinquished.

“It’s frustrating, especially because we felt like we played a good first period,” said Blues defenseman Torey Krug, who had an assist. “We thought that if we got the first (goal), it’d go a long way and unfortunately it kind of unraveled on us. We responded pretty well in the third period, obviously too little too late.”

The Golden Knights (42-31-8, 92 points) are coming off a far more crushing loss. Wednesday’s 4-3 shootout defeat to the Chicago Blackhawks officially eliminated them from postseason contention.

After heading into the 2021-22 season as one of the favorites to hoist the Stanley Cup, the Golden Knights rarely played with a healthy lineup, and will now miss the playoffs for the first time in the franchise’s five-year history.

“A lot’s being said and made of the injuries we’ve had, but the same time, we’ve had such great depth that you expect to at least get into the playoffs with that adversity,” Vegas forward Max Pacioretty said. “It’s just a tough pill to swallow right now and it’s going to take some time to digest, because right up to the end there, I never lost hope in thinking we were going to make it.”

Vegas is 1-2-3 over its last six games and has lost three-consecutive games in shootouts. Adding to the frustration, the Golden Knights didn’t score a single goal in all 17 rounds of those three shootouts.

With regular Vegas goalies Robin Lehner and Laurent Brossoit sidelined by injury, Logan Thompson was pressed into regular action down the stretch. If Thompson doesn’t get the nod in the Golden Knights’ final game, backup Jiri Patera could make his NHL debut.

Robert Thomas’ 17-game point streak for the Golden Knights also came to an end against Colorado. Tied for the longest points streak in the NHL this season, Thomas had 29 points (eight goals, 21 assists) over the 17 games.

Since Jordan Binnington started in net against the Avalanche, St. Louis could start Ville Husso against the Golden Knights. Husso has emerged as a viable starting option for the Blues and could get some action to stay sharp heading into the playoffs.

The Blues won their previous two meetings with the Golden Knights this season.