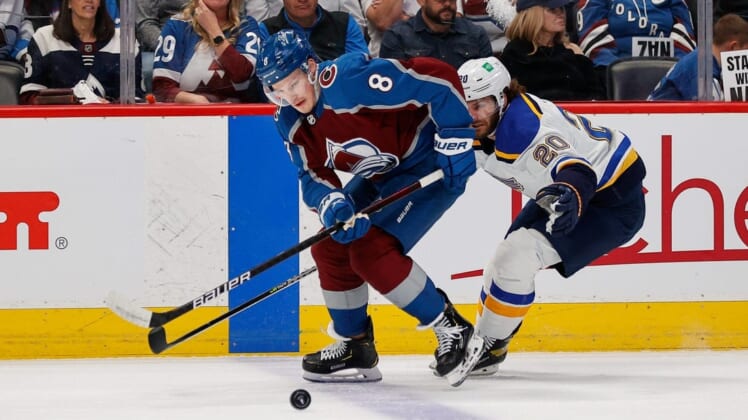 Tyler Bozak scored at 3:38 of overtime, and the St. Louis Blues rallied to beat the Colorado Avalanche 5-4 in Denver on Wednesday night to stay alive in the Western Conference semifinal series.

Robert Thomas scored twice, Vladimir Tarasenko had a goal and an assist, Justin Faulk scored once, Nick Leddy had four assists and Pavel Buchnevich had two assists for St. Louis.

Nathan MacKinnon had a hat trick and an assist, Gabriel Landeskog scored a goal, Bowen Byram had two assists and Darcy Kuemper had 25 saves for the Avalanche.

Bozak won it when he skated to the slot and fired a shot that beat Kuemper.

Colorado took a 1-0 lead when MacKinnon’s one-timer from between the circles beat Husso on the stick side at 3:51 of the first period.

MacKinnon made it 2-0 when his initial shot was saved by Husso and then bounced off his body and in at 18:23 of the first.

Colorado struck again early in the second period. Artturi Lehkonen won a faceoff in the St. Louis end, MacKinnon tapped it back to Devon Toews, whose shot from the point was deflected by Landeskog and by Husso at 4:02.

It was Landeskog’s sixth goal of the postseason.

The Blues got on the board when Tarasenko wristed a loose puck over Kuemper’s left shoulder at 14:42 of the second, his sixth goal of the playoffs.

St. Louis made it a 3-2 game midway through the third when Buchnevich fed Thomas for a one-timer at 9:57. The Blues tied it in the final five minutes of regulation when Faulk tipped in a rebound at 15:14, his first goal of the playoffs.

MacKinnon put the Avalanche back in front when he got the puck behind the Avalanche net, skated with it down into the Blues end, stickhandled around Leddy and roofed a forehand over Husso’s right shoulder at 17:14.

Husso came off for an extra skater and Thomas sent it to overtime at 19:04.