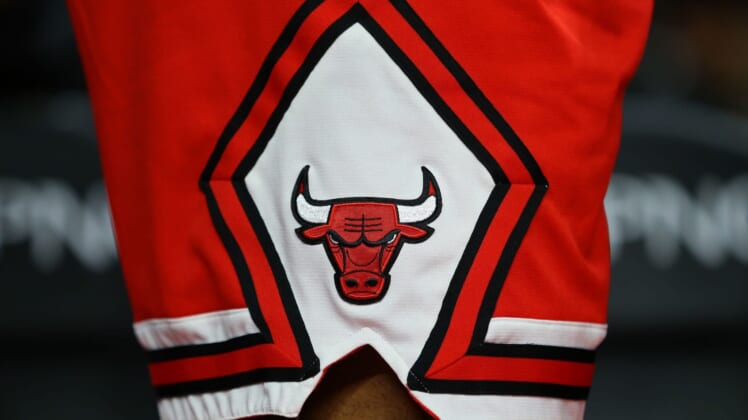 Dec 6, 2016; Auburn Hills, MI, USA; A view of the Chicago Bulls logo on a pair of game shorts at The Palace of Auburn Hills. The Pistons won 102-91.Mandatory Credit: Aaron Doster-USA TODAY Sports

With the All Star break passing, all eyes are on the city of Chicago as the team that was once a storied dynasty has continued to fall from grace and drop further down the list of bottom-tier squdads in the NBA.

Amid another underachieving season riddled by injury, it may be time to look ahead to the off-season and figure out what moves general manager Gar Forman and the Bulls can make to turn Chicago back into a legitimate threat in the Eastern Conference.

Heading into the 2020 off-season the Bulls could potentially have a significant amount of flexibility regarding roster changes.

Lock down the forward position: There are three free agents the Bulls should have their eyes set on.

Trade for Rising Stars: Every rebuild needs the proper building block. The best way to accelerate a franchise’s reboot is to acquire a talented, established player with untapped potential. By trading for a rising superstar, the Bulls can start to build a roster around them in a way that maximizes their star’s potential and creates a blueprint for the franchise moving forward. When looking around the league, there are definitely a few rising stars that should be on the Bulls’ radar.

Draft a Playmaker: With those potential trades in mind, there is a high probability that the Bulls first-round pick this year would have to be included in order to land players of the caliber of Simmons or Hield. But if those moves were to fall through, Tankathon projects the Bulls to be the eighth overall pick right now based on the standings.

Reach For the Big Free Agents: The 2021 off-season is the next big free agency summer where some of the biggest superstars in the league from Lebron James to Giannis Antetokounmpo will all become available for teams to sign. As a big market franchise, the Bulls need to try and bring in at least one topflight player to really get the team back on the map.

The Bulls front office should truly be open to hearing out any possible trade offers and taking risks that will allow them to go after versatile players who provide something on both ends of the court.

Right now, the core guys being Zach LaVine, Lauri Markkanen, and Kris Dunn all are specialists to a certain degree. LaVine and Markkanen are both finesse players who tend to be streaky offensively while providing very little on the defensive end.

On the other hand, Dunn is more of a defensive guy who can be elite on that side of the ball but tends to be relatively quiet offensively outside of his occasional great shooting nights from behind the arc.

Acquiring these players while unloading players like LaVine, Markkanen, Tomas Satoransky and others creates an opportunity for Chicago to bring in true potential superstars without having to compete heavily in free agency.