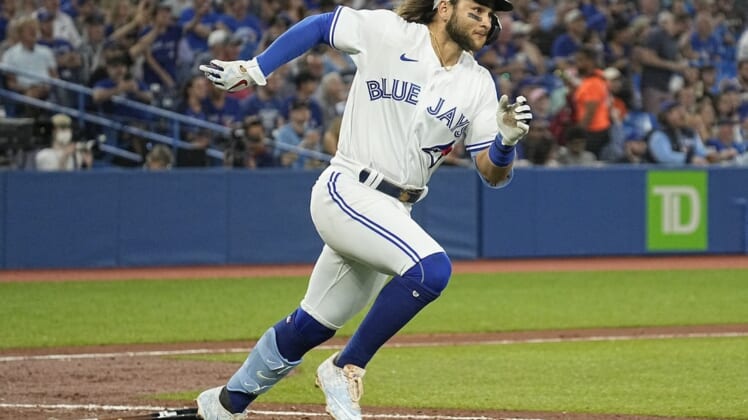 The Toronto Blue Jays will try to extend their season-best winning streak to seven games Wednesday night when they start left-hander Hyun Jin Ryu against the visiting Chicago White Sox.

The Blue Jays won the opener of a three-game series Tuesday night 6-5 as Alejandro Kirk hit a pair of two-run homers and a single.

“I’m just trying to be more selective and looking for the pitch I want,” Kirk said through a translator.

“He’s nice and relaxed again and doing what he does,” Blue Jays manager Charlie Montoyo said.

A base-running mistake cost Chicago a chance to tie the game in the sixth. Danny Mendick tagged up at first and was thrown out at second for the third out before Reese McGuire reached home plate on what should have been a sacrifice fly to left.

It was the first game at home for the Blue Jays after a 5-1 trip that included a four-game sweep of the Los Angeles Angels.

“He’s back to himself,” Montoyo said recently. “He’s commanding his pitches, he’s throwing his breaking pitches for strikes. And when you see that, that’s when he pitches well.”

Ryu has two career starts against the White Sox, both last season when he was 0-2 with a 9.31 ERA against them.

Right-hander Michael Kopech (1-1, 1.29) will start for the White Sox, who have lost four of their past six games.

Kopech will pitch for the first time since May 22, when he allowed one hit over seven scoreless innings against the New York Yankees. The added time between starts was to manage his innings as he makes the move to a regular in the rotation after pitching mostly from the bullpen last season.

Kopech appreciated what he learned by being in the bullpen last season, but he enjoys being a regular starter.

“I feel like I have the opportunity to kind of clean things up in between,” he said. “And take what I learned from the last one for five days into the next one and then take what I learned in a bad way and try to flush that. Having that time is so valuable, and it’s been so nice. It still has its own challenges, but I really enjoy it right now.”

He has two career relief outings against the Blue Jays, both last season when he allowed five runs and six hits in 1 1/3 innings.

Chicago put shortstop Tim Anderson (groin) on the injured list Monday and activated outfielder Luis Robert (COVID-19 related IL). The White Sox think Anderson could be out for three weeks. Robert did not play Tuesday but could be used as the DH on Wednesday.

Chicago is without right-handed reliever Kendall Graveman, who is on the restricted list because he does not meet Canadian COVID-19 vaccination requirements. Right-hander Kyle Crick was promoted from Triple-A Charlotte and pitched a perfect eighth on Tuesday.