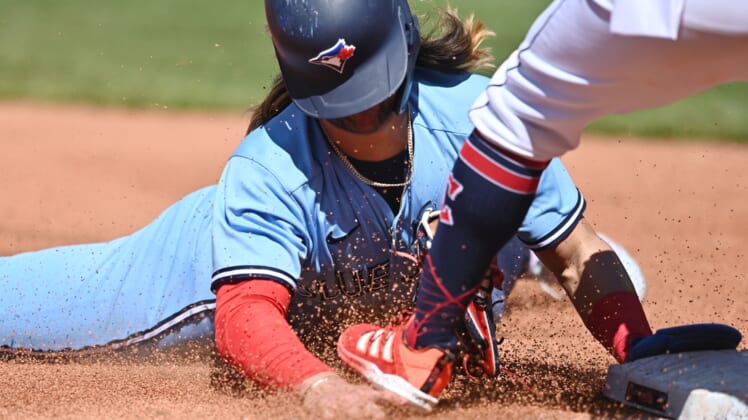 Raimel Tapia and George Springer each had three RBIs Saturday afternoon as the visiting Toronto Blue Jays defeated the Cleveland Guardians 8-3 in the opening game of a doubleheader.

Kevin Gausman (3-1) earned his third successive win while allowing one run, six hits and one walk and striking out five in 6 1/3 innings of work.

Gausman walked Franmil Reyes with two out in the fourth inning — the first walk he has allowed this season, ending a streak of 136 batters without issuing a free pass.

Cleveland starter Shane Bieber (1-2) was knocked around for seven runs on eight hits and three walks in 3 1/3 innings.

Cleveland scored once in the third when Myles Straw singled with two out, stole second and scored on Steven Kwan’s single.

Toronto added three runs in the fourth to knock Bieber out of the game. Espinal opened the inning with a single to shortstop, Kirk singled to send Espinal to third and Tapia hit an RBI single to right that popped out of Kwan’s glove in windy conditions. Springer followed with an RBI single and another run scored on Bo Bichette’s fielder’s choice grounder.

Anthony Castro came in for the Guardians and struck out four in 2 2/3 innings before giving way to Enyel De Los Santos, who allowed a seventh-inning a run on three walks and Kirk’s fielder’s choice ground out.

That made it 8-1 Blue Jays, and in the bottom of the seventh, Trent Thornton replaced Gausman with one out and a runner at first base.

Anthony Gose, a former Blue Jays outfielder and now a pitcher, came in for the eighth, and pitched around a walk with two strikeouts.

When Thornton walked the first three Cleveland batters of the bottom of the eighth, Julian Merryweather came on and the Guardians scratched out two runs on Owen Miller’s RBI fielder’s choice grounder to second and Josh Naylor’s sacrifice fly.

The doubleheader made up for the weather postponement of the game Friday. Cleveland won the opener of the four-game series on Thursday.

Toronto activated Teoscar Hernandez (left oblique strain) from the injured list on Saturday and made him the 27th player for the doubleheader. He did not play in Game 1.