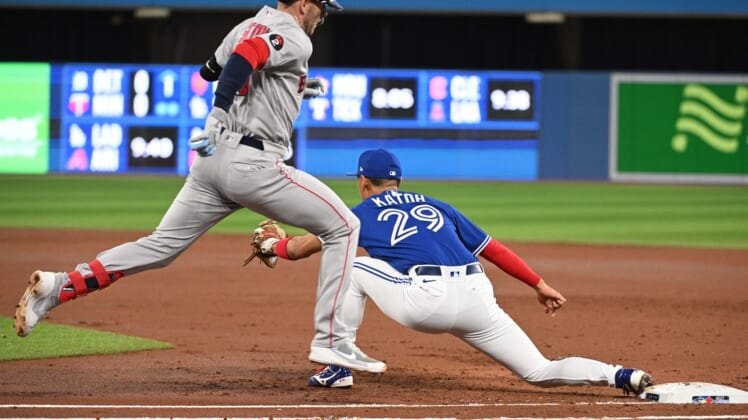 Boston took a 5-2 lead with four runs in the eighth in the opener of a four-game series.

Toronto tied the game in the ninth against Jake Diekman. After Tapia and Santiago Espinal hit doubles, George Springer tied the game with a two-out, two-run homer. It was his fourth homer of the season.

Jordan Romano (1-1) retired his three batters in the 10th, stranding the designated runner at third.

Toronto starter Kevin Gausman allowed one unearned run, four hits and no walks while striking out nine in six innings. He has not allowed a walk in 95 batters this season, the most to start a Blue Jays career; Brett Anderson went 79 batters without a walk in 2017.

The Blue Jays took a 1-0 lead in the third inning — on two walks, a wild pitch and Springer’s RBI single.

The Red Sox tied the game in the top of the fourth. Xander Bogaerts led off with a single, stole second and reached third on catcher Zack Collins’s throwing error. He scored on a sacrifice fly by Enrique Hernandez, who was out thanks to a diving catch by center fielder Bradley Zimmer.

Toronto regained the lead in the bottom of the fourth. Guerrero led off with a walk and took second on a single by Collins. Espinal then blooped a two-out RBI single to center.

Yimi Garcia allowed singles to pinch hitter Rafael Devers and Christian Vazquez to open the top of the eighth. Trevor Story tied the game with a double, and Alex Verdugo gave Boston a 3-2 lead with a sacrifice fly to left. Boagaerts followed with an RBI double.

Hansel Robles pitched around a single in the bottom of the eighth.