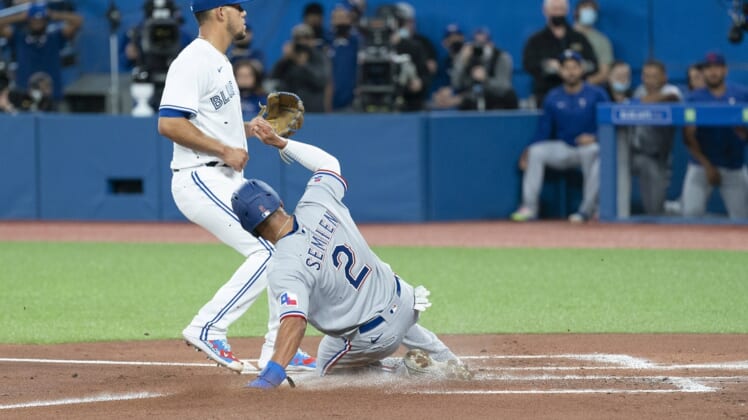 Teoscar Hernandez hit a three-run homer for the Blue Jays and Danny Jansen had a solo shot on opening night in Toronto.

Seager doubled and Garver homered in the second inning.

The lead reached 7-0 in the fourth after Trent Thornton walked Seager and allowed singles to Garver and Lowe.

Toronto tied the game in the fifth. John King gave up a walk and a single with two out, Josh Sborz allowed Guerrero’s RBI single and Hernandez’s homer.

Toronto took an 8-7 lead when Sborz walked Jansen with two out and Santiago Espinal doubled him home in the sixth.

Garcia’s homer in the seventh against Adam Cimber (1-0) tied the game.

Toronto took a 9-8 lead in the bottom of the seventh when Dennis Santana (0-1) walked Hernandez with two out and allowed Gurriel’s RBI double.

Yimi Garcia pitched around a walk in the top of the eighth.

Jansen homered against Greg Holland in the bottom of the eighth.

Jordan Romano pitched a perfect ninth, helped by Gurriel’s sliding catch in left field, to earn the save.