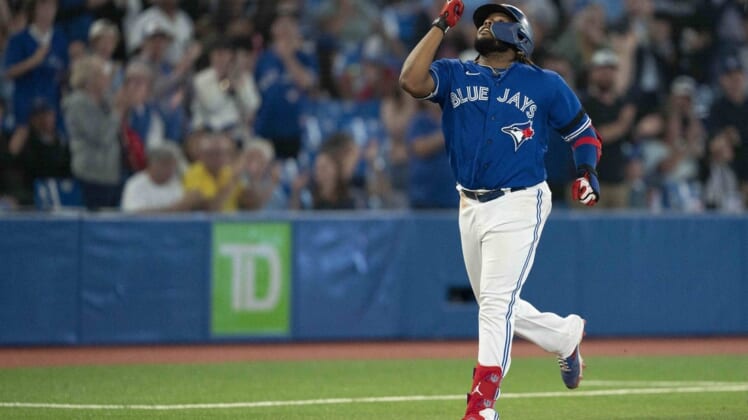 The Toronto Blue Jays will be out to maintain their dominance over the visiting Baltimore Orioles on Tuesday night in the second game of a four-game series.

That trend continued Monday night in the first game between the teams this season when the Blue Jays rapped out a season-best 19 hits in an 11-1 victory.

Guerrero had three hits: a pair of run-scoring singles and a solo homer, his 15th long ball of the season. Santiago Espinal also had three RBIs on two singles.

“That’s great to see,” Blue Jays manager Charlie Montoyo said. “That’s what we expected at the beginning (this season). They’re doing that right now. It’s easier on the pitchers coming in, with room for error.”

Blue Jays right-hander Alek Manoah did not need much support on Monday, allowing one hit while striking out seven in six innings. He earned his major-league-high-tying eighth win of the season.

Manoah watched as the Blue Jays scored seven runs in the fifth inning to take a 9-0 lead.

“It’s great,” Manoah said. “Once we got to seven, it’s like, all right, enough. The offense can do that on any given night. They always show up and put runs on the board. Being able to go back out there for the sixth with a nine-run lead, there’s nothing better than that.”

In two career outings against the Orioles, Kikuchi is 1-1 with a 4.15 ERA.

Lyles is 1-1 with a 7.79 ERA in four lifetime appearances (three starts) against Toronto.

The Orioles are playing the series without outfielder Anthony Santander and left-hander Keegan Akin, who were placed on the restricted list Monday because they did not meet Canadian COVID-19 vaccine requirements.

Baltimore selected right-hander Rico Garcia and outfielder Kyle Stowers from Triple-A Norfolk to replace them. Both played on Monday.

“This is something that teams are going through when they come up here,” Orioles manager Brandon Hyde said. “We’re excited to give Kyle and Rico the opportunity to be with us, at least for this series, and we’ll see how it goes.”

Stowers started in left field in his major league debut, and he went 1-for-3 and also hit by a pitch. His first major league hit was an RBI double in the seventh inning against Julian Merryweather.

“It’s awesome,” Stowers said. “It’s a dream come true for sure, and everybody’s been super great.”

Garcia pitched two innings and allowed Guerrero’s home run in the eighth. He was back in the majors for the first time since 2020, having recovered from Tommy John surgery.

“(I saw Garcia) throw a few bullpens in spring training,” Hyde said. “Off to a really good start this year, kind of climbed the ladder. … Traditionally been a strike-thrower. He’s shown really good stuff in Norfolk.”

Santander is hitting .238 but leads the Orioles with 11 home runs and is second with 33 RBIs. As a switch hitter, he is an important part of the lineup.

“It’s a middle-of-the-order bat,” Hyde said. “He swung the bat well in Kansas City, but this is what it is right now.”

After allowing Stowers’ double, Merryweather left the game due to discomfort in his left side.

The Blue Jays were without third baseman Matt Chapman (wrist) for the third consecutive game.