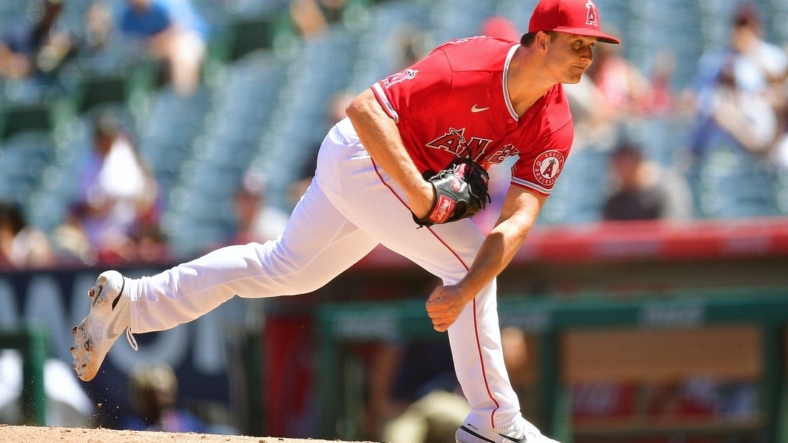 The Toronto Blue Jays will try to score their first runs of their three-game series with the visiting Los Angeles Angels and salvage the finale Sunday afternoon.

The Angels have shut out the Blue Jays in the first two games of the series — 12-0 on Friday and 2-0 on Saturday. They are 3-6 with one game left on their 10-game road trip.

It is the first time that the Blue Jays have been shut out in consecutive games since May 6-7, 2019.

The Angels have 16 shutouts this season and it was the fourth time they have blanked their opponents in consecutive games.

Ohtani has nine or more strikeouts in 11 starts this season, tied for the most in the majors with Gerrit Cole of the New York Yankees.

The Angels will start left-hander Tucker Davidson (2-4, 6.23 ERA) on Sunday. He will face Toronto for the first time.

Andrew Velazquez hit his eighth home run of the season, a solo shot in the ninth inning Saturday. Luis Rengifo had an RBI single in the sixth and David Fletcher had three hits for the Angels.

Ryan Aguilar picked up his first career major league hit with a double to lead off the fifth but was out trying for a triple. The right fielder walked twice and scored twice in his major league debut on Friday.

He felt that the Angels’ young players would benefit from playing in front of a sellout crowd of 45,311 on Saturday as the Blue Jays honored their 1992 World Series champions in a pregame ceremony.

“Regardless of being at home or away, when the crowd is electric like this, as a player, I love playing, pitching in those types of situations,” Ohtani said through his interpreter.

He came out on top in a matchup between two of baseball’s top pitchers.

“I enjoyed it, but I would like to avoid it, if possible, because he’s a great pitcher and (there is) less chance of getting good results at the plate,” Ohtani said. “But I did enjoy going pitch-for-pitch with him.”

“(Ohtani) kind of flipped the script a little bit and went to his heater a little bit more,” Blue Jays interim manager John Schneider said. “When you’ve got 100 in your back pocket, it’s a pretty good weapon to have.”

Schneider was ejected in the eighth inning for arguing balls and strikes.

George Springer, who was on the injured list with right elbow inflammation from Aug. 5-14, singled in the first inning Saturday to extend his hitting streak to a season-best 11 games. He is 19-for-40 (.475) during the streak with nine RBIs. He played his first game in center field Saturday since coming off the IL.

Blue Jays right fielder Teoscar Hernandez (left foot contusion) did not play Saturday. He fouled a ball off his foot on Friday and left the game after two innings.