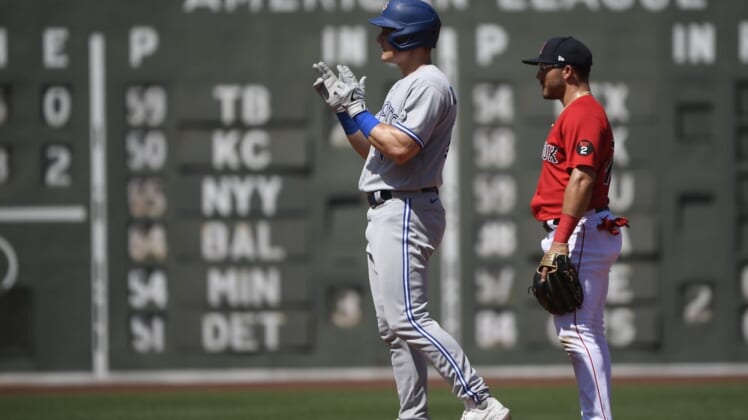 This week’s American League East clash in Boston features a role reversal from the norm as the Toronto Blue Jays begin a three-game series against the Red Sox with a commanding upper hand in the standings.

The opener is Tuesday night.

The Blue Jays entered the week in a virtual tie with Tampa Bay and Seattle atop the wild card standings after taking two of three from the Yankees in New York.

Despite a 4-2 loss in Sunday’s series finale, Toronto has won four of five. Across those five games, the team’s starting pitchers have allowed just three earned runs in 30 innings.

Boston, meanwhile, was unable to pick up its third consecutive series win after Sunday’s 5-3 loss to Baltimore at the Little League Classic in Williamsport, Pa.

“It’s not an easy day, travel-wise and all that,” manager Alex Cora said. “But then when you get here and you forget about all the luxury and the five-star hotels and traveling and all that, and you get connected with kids and the whole atmosphere, it was awesome.”

It was a memorable day, but the loss dropped the Red Sox to six games back in the wild-card race.

Franchy Cordero’s game-tying home run in the eighth inning went to waste as the Orioles pulled ahead a half-inning later against oft-used reliever John Schreiber.

Neither he Blue Jays, nor the Red Sox, have announced who will pitch on Tuesday.

Boston was originally set to start Nathan Eovaldi, who was scratched from his scheduled Thursday outing in Pittsburgh with a sore trap muscle. However, Eovaldi’s return to the rotation will be delayed as Cora said the righty “hasn’t been able to bounce back.”

“I feel like it’s going a little slower than we had anticipated it. But I am feeling a lot better every day,” Eovaldi said. “It’s just how far we can push it back. We want to make sure that it’s 100 percent, especially going down the road for this home stretch.”

Eovaldi, who said he felt comfortable enough to pitch in his original slot, is hoping to avoid another stint on the injured list. He was reinstated on July 15 after dealing with low back inflammation.

The Red Sox hope to have first baseman Eric Hosmer available after he missed Sunday’s game with lower back pain.

Former Red Sox outfielder Jackie Bradley Jr., who was signed by the Blue Jays on Aug. 9 after being released, has driven in three runs over his past two starts. He hit a two-run double during Saturday’s 5-2 win in New York and drew a bases-loaded, game-tying walk in Sunday’s seventh inning.

The series will mark Bradley’s first time facing the organization that drafted him in 2011. His playoff experience will come in handy in the young clubhouse.

“I’m just trying to help out any way I possibly can,” Bradley said. “Obviously, it’s a really good team. I’m excited to be here. … It’s going to be fun (competing in a playoff race). There’s going to be a lot more attention, but (I’d just tell the rest of the team) to enjoy the moment and have fun.”