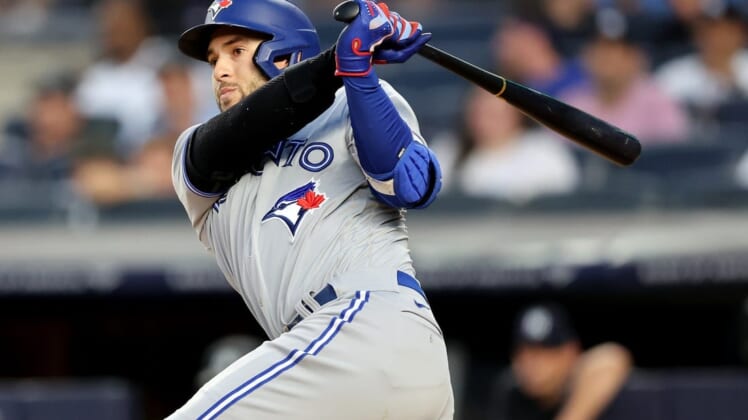 As Jose Berrios wrapped up his postgame interview on Thursday, Hall of Famer Jim Kaat strolled through the basement hallway of Yankee Stadium and gave the Toronto Blue Jays’ right-hander a thumbs-up.

The rest of the Blue Jays also drew rave reviews for their impressive display in the opener of a pivotal four-game series against the New York Yankees.

Following a productive night at the plate, the Blue Jays will look to make it two in a row over New York on Friday.

Toronto is within nine games of the Yankees, the closest the Blue Jays have been since they also trailed by nine on June 15. They were 16 1/2 games back on July 10 but are 18-12 since and opened the series by amassing 13 hits in a 9-2 rout on Thursday.

The series opener marked the fourth time Toronto scored at least nine runs since the All-Star break, and it was the fifth time the Blue Jays totaled at least 13 hits since the break. George Springer led the way by going 5-for-5 while Vladimir Guerrero Jr. hit a three-run homer and scored three times.

“Obviously they’re in the lead by nine games or whatever it is, but every game from here on out is huge,” Springer said. “It doesn’t matter who we’re playing. It’s pretty much a playoff-style mentality, all hands on deck.”

The Yankees were hoping to gain some traction after Josh Donaldson’s 10th-inning grand slam gave them an 8-7 victory over the Tampa Bay Rays on Wednesday, but they faltered again at the plate on Thursday.

The Yankees, who are 4-13 in their past 17 contests, went 1-for-10 with runners in scoring position in the opener against Toronto. New York batters struck out 13 times, and the team’s only runs came on balls that did not leave the infield.

Thursday marked the 11th time in the 17-game slump that New York did not produce more than three runs.

“This is about us playing well,” Yankees manager Aaron Boone said. “We play well, that takes care of itself. Obviously, we haven’t played well enough in the last 10 days. … We have to play better.”

Gausman followed consecutive scoreless outings by getting tagged for five runs and nine hits in 4 2/3 innings during a 7-2 loss to the Cleveland Guardians on Sunday.

The right-hander took the loss in his latest outing; he allowed three runs on six hits in seven innings in a 3-0 defeat at Boston on Sunday.