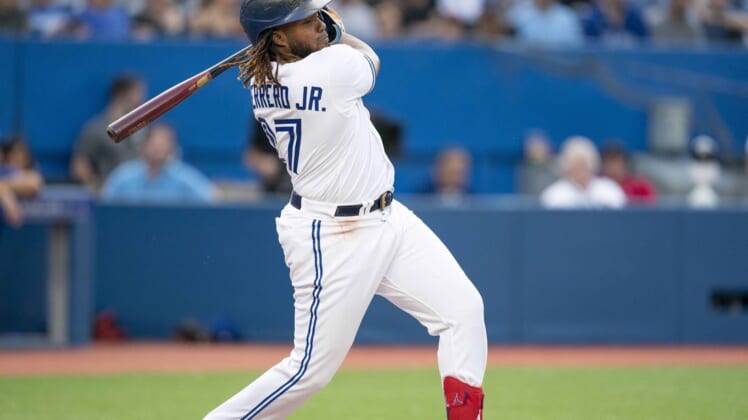 Willi Castro and Jonathan Schoop hit solo home runs for the Tigers in the opener of a four-game series.

Toronto left-hander Yusei Kikuchi (4-5) was reinstated from the 15-day injured list (neck strain) to make the start. He allowed one run, two hits and one walk while striking out five in five innings.

Castro hit his third home run of the season on a drive to right center with two out in the second.

George Springer reached first base with one out in the third on a throwing error by Javier Baez on a grounder to shortstop. He took second on a groundout and scored on Alejandro Kirk’s broken-bat single.

Lourdes Gurriel Jr. singled with one out in the fourth and Chapman followed with a home run to left.

Angel De Jesus allowed Chapman’s 18th home run of the season with one out in the bottom of the sixth.

Schoop hit his seventh home run of the season on a drive to left against Tim Mayza with one out in the seventh.

Jose Cisnero replaced DeJesus with one out and runners at the corners in the bottom of the seventh and induced a double-play grounder from Teoscar Hernandez.

Victor Reyes led off the eighth with a double against Yimi Garcia. Reyes held second when shortstop Bo Bichette was charged with an error on Robbie Grossman’s popup. Baez walked.

Eric Haase hit a sacrifice fly with one out and Jordan Romano replaced Garcia to end the inning on a groundout.

Alex Lange allowed an unearned run in the bottom of the eighth started by third baseman Jeimer Candelario’s throwing error. A walk and a sacrifice set up Danny Jansen’s sacrifice fly.

Romano pitched a perfect ninth to earn his 22nd save.

Detroit put left-hander Andrew Chafin on the restricted list Thursday because was not vaccinated against COVID-19 and could not enter Canada. Right-hander Bryan Garcia was selected from Triple-A Toledo as a replacement.