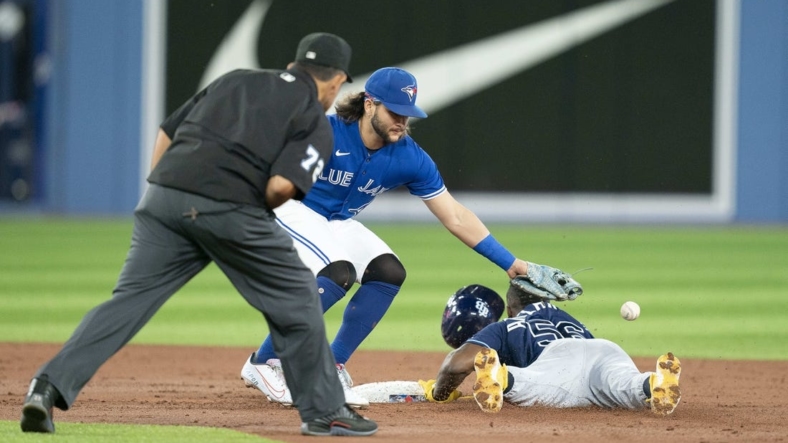 George Springer added a two-run home run in the four-run inning against Colin Poche (4-2). The Blue Jays (80-62) have won two of the first three games of the five-game series with the Rays (79-62).

Ji-Man Choi and Jonathan Aranda hit solo homers for the Rays. It was Aranda’s first in the majors.

Toronto right-hander Alek Manoah allowed two runs, five hits and two walks while striking out five in 6 2/3 innings. Manoah was scratched from starting the opener of the doubleheader because of a stomach ailment.

After Alejandro Kirk led off the bottom of the second with a single, Rays center fielder Jose Siri made a leaping catch at the wall to take extra bases away from Teoscar Hernandez.

Choi led off the third with his 10th home run of the season, a blast into the second deck in right field.

Vladimir Guerrero Jr. led off the bottom of the sixth with a double against Garrett Cleavinger. He took third on Bo Bichette’s groundout to second. Jalen Beeks replaced Cleavinger. Guerrero scored on Kirk’s groundout to the pitcher on a trickler down the first-base line.

Aranda led off the seventh with a home run to left. After Choi walked with one out and was forced at second by Siri, Anthony Bass (4-3) replaced Manoah.

Poche walked pinch hitter Santiago Espinal to start the bottom of the seventh. Espinal reached third on two wild pitches. Pinch hitter Danny Jansen walked and Merrifield hit a two-run double over third base. Springer then hit his 20th homer of the season.

Adam Cimber allowed two singles in the eighth, leaving runners at the corners with two outs for Jordan Romano, who ended the inning.

Zach Pop allowed only a walk in the ninth.