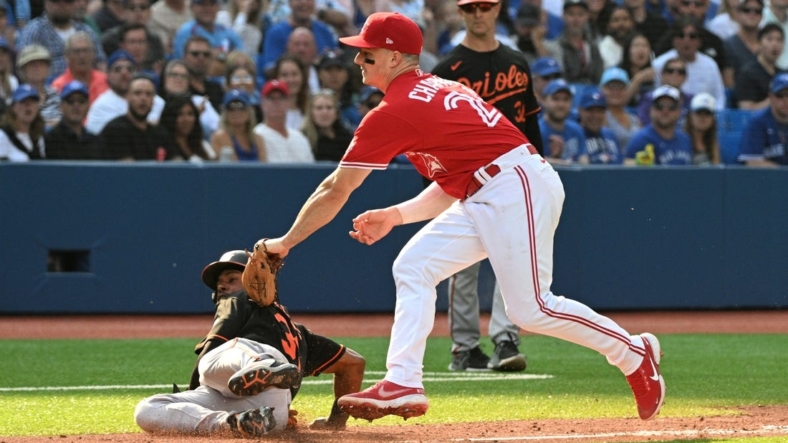 Raimel Tapia hit a three-run double in the fifth inning and the Toronto Blue Jays defeated the visiting Baltimore Orioles 6-3 on Saturday afternoon.

George Springer had a second-inning, two-run double for the Blue Jays (83-63), who have won the first two games of the three-game series by the same score.

Gunnar Henderson had two hits and two RBIs for the Orioles (75-69).

George Springer led off the bottom of the first with a single. Vladimir Guerrero Jr. extended his hit streak to 11 games when he squibbed an infield hit down the third-base line. After Bo Bichette’s fielder’s choice grounder, Matt Chapman hit a sacrifice fly.

Berrios hit Ryan Mountcastle on the elbow with a pitch to open the second. The Orioles loaded the bases on a double and a two-out walk, but did not score. Mountcastle did not return for the bottom of the second with Jesus Aguilar replacing him as first baseman. X-rays were negative on Mountcastle (elbow contusion).

Cavan Biggio and Santiago Espinal singled with one out in the bottom of the second and scored on Springer’s double.

Cedric Mullins led off the third with a single, Anthony Santander doubled and Aguilar reached first on catcher’s interference to load the bases. Henderson hit a two-run single to cut Baltimore’s deficit to 3-2.

Jake Reed replaced Bradish in the fifth with two out and two runners on after an error and a walk. Reed walked Teoscar Hernandez to load the bases and Tapia hit a three-run double.

Tim Mayza replaced Berrios and pitched a 1-2-3 seventh before Henderson doubled with one out in the eighth against Yimi Garcia and scored on Terrin Vavra’s single.

Baltimore’s Keegan Akin struck out the side in the bottom of the eighth. But Toronto’s Jordan Romano overcame a walk in the ninth to earn his 34th save.