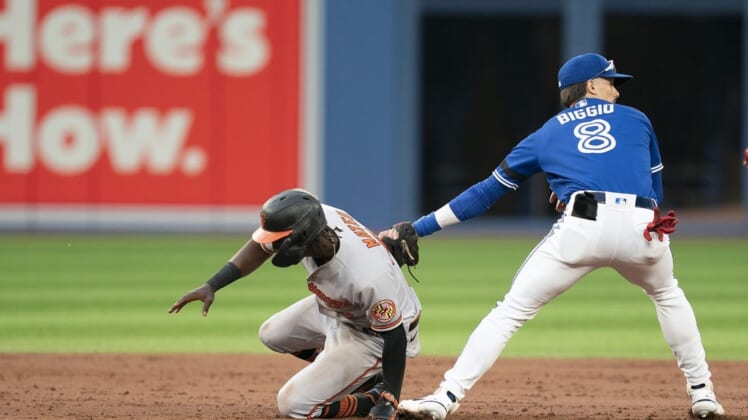 Right-hander Alek Manoah allowed one hit in six scoreless innings and the Toronto Blue Jays had a season-best 19 hits in an 11-1 victory over the visiting Baltimore Orioles on Monday night.

Vladimir Guerrero Jr. had three RBIs on a solo homer and two singles and Santiago Espinal had three RBIs for the Blue Jays in the opener of a four-game series. Teoscar Hernandez and Lourdes Gurriel Jr. each added three hits.

Kyle Stowers had an RBI double in his major league debut for the Orioles. He also was hit by a pitch in going 1-for-3.

Manoah (8-1) became the second eight-game winner in the majors this season. He allowed one walk and struck out seven.

Toronto scored once in the first when George Springer led off with an infield single and came home on Alejandro Kirk’s two-out single.

Manoah survived a single, a catcher’s interference and an error with the help of a caught stealing in the third.

Toronto added a run in the bottom of the third on Springer’s double and Guerrero’s single against a drawn-in infield.

Toronto scored seven in the fifth.

Cavan Biggio led off with a walk, took third on Bo Bichette’s one-out single and scored on Guerrero’s infield single to shortstop when Jorge Mateo’s flip to second went wide after his diving stop.

Espinal added an RBI single in the sixth off Austin Voth, the Orioles’ third pitcher.

Stowers doubled in his third at-bat to drive in a run against Julian Merryweather with two out in the seventh. Merryweather left with a side injury and was replaced by Adam Cimber.

Guerrero hit his 15th homer of the season in the eighth against Rico Garcia.