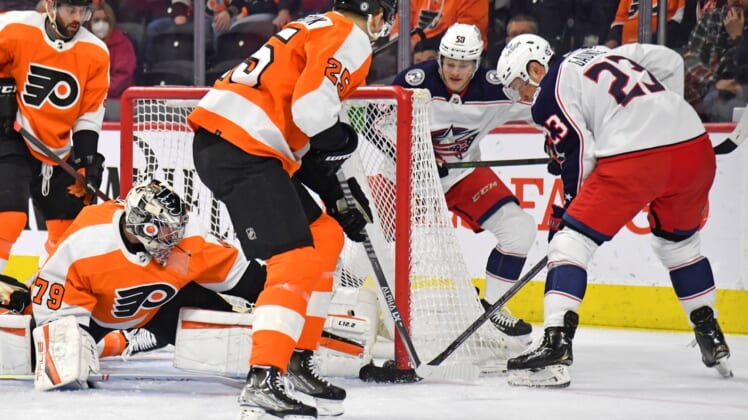 Carson Meyer and Sean Kuraly each had one goal and one assist to lift the Columbus Blue Jackets past the host Philadelphia Flyers 4-2 on Tuesday.

Brendan Gaunce and Justin Danforth scored one goal apiece for the Blue Jackets (33-32-6, 72 points), who snapped a seven-game losing streak (0-4-3).

Noah Cates and James van Riemsdyk scored one goal each for the Flyers. Flyers goaltender Carter Hart stopped 26 of 29 shots in defeat

The Blue Jackets went ahead 1-0 when Gaunce connected at 2:38 of the first period. Gaunce pounced on a loose puck and jammed it under Hart’s pads.

Meyer later recorded his first career goal in his second NHL game for a 2-0 Columbus advantage at 13:23.

After failing to execute on two power plays, the Flyers managed to close within 2-1 when Cates scored the first goal of his career at 17:35. Cates received a crisp pass from Patrick Brown and beat Merzlikins over his glove hand.

The Flyers had several strong chances on their third power play early in the second period but couldn’t capitalize. Cam York ripped a slap shot off the post at 5:41.

Philadelphia equalized at 2 when van Riemsdyk redirected a shot in front at 13:16 of the period.

The Blue Jackets nearly regained a one-goal advantage at 14:38 when Patrik Laine skated in all alone and sent a nasty wrist shot on goal. Hart was able to extend for a nifty glove save.

Laine unleashed another strong shot at 1:58 of the third.

The tempo soon opened up with each team creating numerous scoring chances.

Kevin Hayes broke free at center ice, skated in and had his shot stuffed by Merzlikins at 7:04.

Despite some aggressive pressure from the Flyers, the Blue Jackets rallied for a 3-2 advantage when Danforth scored at with 6:44 remaining in regulation.

Hart was pulled for an extra skater for the final two minutes yet the Flyers couldn’t convert. Kuraly then scored an empty-net goal with 19.4 seconds left for a two-goal lead.