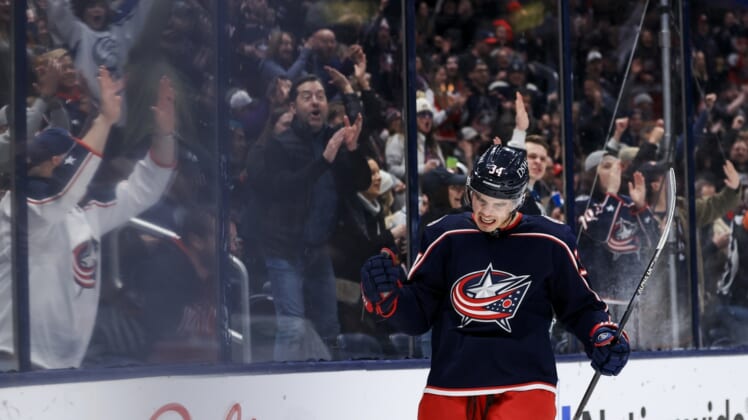 The Columbus Blue Jackets have enjoyed success of late when facing the Ottawa Senators, save for their most recent encounter.

The Blue Jackets will look to avenge a 2-1 setback to the Senators on Jan. 23 when the teams reconvene in Ottawa on Wednesday night.

Columbus posted a 6-0-1 record vs. the Senators before that loss.

While Cole Sillinger didn’t score in that last meeting with Ottawa, the 18-year-old made his mark in the Blue Jackets’ 6-4 victory over the Vegas Golden Knights on Sunday. The youngest player in the NHL this season recorded his first career hat trick to send Columbus to its second straight win.

“It didn’t really feel real, and then kind of going forward in the second period there, I was kind of, not really zoned out but just like, ‘Oh my God, what just happened?'” Sillinger said.

He logged a bit more ice time with captain Boone Jenner (back) and fellow forward Jakub Voracek (knee) nursing injuries. Jenner, who was placed on injured reserve retroactive to last week, is tied for the team lead in goals (23) while Voracek holds top honors in assists (40).

“He’s got a tremendous upside on his offensive game,” Blue Jackets coach Brad Larsen said of Sillinger. “We always forget he’s 18. At least, I think some people do. And he’s going through the grind of a season. He’s a kid that sees an opportunity. You know, some guys when they see these opportunities, they get excited. And it’s amazing what some guys can do. Some guys freeze. He doesn’t seem to be that kid.”

Oliver Bjorkstrand collected a goal and three assists Sunday to boost his point total to 12 (six goals, six assists) in his last 10 games. He leads the team with 45 points for the season.

While Columbus is ascending, Ottawa is falling, with seven losses in its last nine games. The Senators skated away with a 5-3 setback to the Arizona Coyotes on Monday despite outshooting the opposition 43-15.

“It definitely (stinks),” Senators captain Brady Tkachuk said after his two-assist performance. “Bad feeling right now. One of our most dominant games we’ve played all year, so it (stinks) that we didn’t get rewarded. Definitely this one is going to sting.”

Tkachuk has three goals and three assists in his past five games to boost his team-leading point total to 44 this season.

Josh Norris has seven points (five goals, two assists) in his past four games after tallying twice on Monday.

Anton Forsberg is in line to get the start on Wednesday. He stopped 35 shots in the previous meeting with the Blue Jackets.

Columbus’ goaltending situation is a bit more up in the air, considering the team will play both Wednesday and then Thursday vs. the visiting Washington Capitals.

Elvis Merzlikins, who made 31 saves in the previous encounter with the Senators, had been in net in seven of his team’s last eight games.

The lone exception saw Joonas Korpisalo yield six goals on 33 shots in a lopsided shutout against the New York Islanders on Thursday.