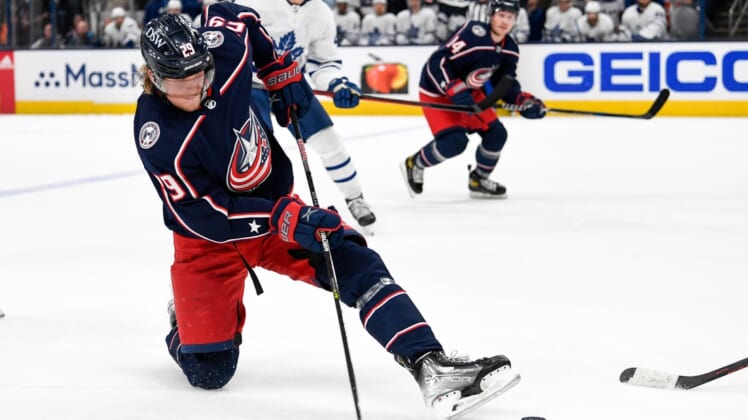 Patrik Laine and Jack Roslovic have each played loads of games at Canada Life Centre, but never as the visitor.

Laine and Roslovic will be in the lineup for the Columbus Blue Jackets when they visit the Winnipeg Jets on Friday night.

The talented young forwards were traded from Winnipeg to the Blue Jackets on Jan. 23, 2021. In exchange, Columbus sent forward Pierre-Luc Dubois and a 2022 third-round draft pick to the Jets.

Laine, who scored 44 goals for Winnipeg in the 2017-18 season and became the first NHL player in 30 years to score 80 goals while still a teenager, is looking forward to his return.

Laine struggled to put up the expected offensive numbers last season, totaling 12 goals in 46 games, but he has a team-leading 25 goals in just 45 games this season.

Laine missed most of November and December with an oblique strain, including Columbus’ 3-0 win against the visiting Jets on Nov. 24, the teams’ first meeting since the trade.

“It will just be fun seeing and playing against old teammates since I didn’t get the chance when they played here,” Laine said.

Roslovic’s next goal will set a career high. He had 12 goals each of the past two seasons and sits on a dozen heading into the matchup in Winnipeg, where he spent his first four NHL seasons.

“A lot of people watched Patty and I play a lot, so it will be interesting to see if there’s boos or if there’s cheers,” Roslovic said. “I think there will be cheers.”

The Jets are coming off a 5-2 loss against the visiting Ottawa Senators on Thursday night. Winnipeg had won four of its previous five, one of its best stretches since its 9-3-3 start to the season.

Winnipeg likely will send Eric Comrie into the goalie crease after Connor Hellebuyck made 28 saves vs. the Senators.

Comrie last played in a 2-1 win against the New Jersey Devils on March 10, when he allowed one goal on 34 shots. He has won his past four starts overall.

“Our guys have a lot of faith in what (Comrie) has been able to do,” Winnipeg defenseman Nate Schmidt said after Comrie’s last outing. “As players, that’s what you want to see from a guy, that you know he’s coming in there and he’s going to give it his all.”

Columbus was dealing with a goalie crisis earlier in the week.

Elvis Merzlikins was struggling with back spasms, which caused him to leave the Blue Jackets’ 5-4 win against the St. Louis Blues on Saturday.

Joonas Korpisalo replaced Merzlikins, made it through Monday’s trade deadline without getting dealt and then saved just 32 of 37 shots in a 5-1 road loss to the Pittsburgh Penguins on Tuesday.

Just as Merzlikins was beginning to feel better and returned to practice on Thursday, the Blue Jackets announced that Korpisalo would be undergoing season-ending hip surgery.

“This is an injury that Joonas has been dealing with for some time, and it has now gotten to the point where surgery is the best option,” Blue Jackets general manager Jarmo Kekalainen said.