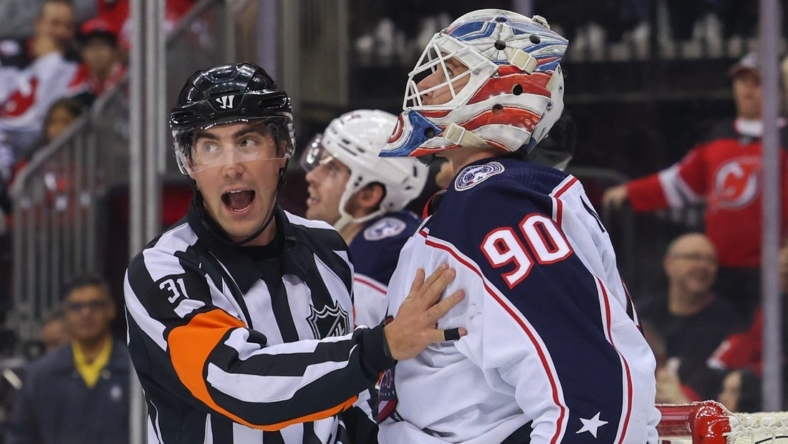 Two teams that have gotten off to surprising starts this season meet Thursday when the Columbus Blue Jackets host the Philadelphia Flyers.

The Blue Jackets have lost nine of their first 12 games after signing star free-agent forward Johnny Gaudreau in the offseason. The move caught the hockey world by surprise and raised expectations.

Columbus has struggled out of the gate under second-year head coach Brad Larsen, losing five straight games — including both contests to the Colorado Avalanche in the NHL Global Series last weekend in Finland.

“We had some zone time, they did. Chances were right there,” Larsen said. “We just completely lost ourselves in the second period, completely. Seven odd-man rushes. We’re trying to cheat the game right now to get offense against their best players. It’s a recipe for disaster.”

“We just lost it,” forward Patrik Laine said. “I don’t know where, but we couldn’t find it. The result, it’s not what we’re looking for. I don’t think we’re going to lose the last 71 games in a row. I feel like we have everything we need in that locker room to win games. Just have to figure out how to play a full 60. That’s been the main issue this year.”

And now the Blue Jackets are dealing with injuries.

The Flyers, on the other hand, have been a pleasant surprise and appear re-energized under first-year coach John Tortorella, who is continuing his reputation of turning around programs with a demanding and intense style.

Philadelphia has secured at least a point in nine of its first 12 games (7-3-2) after recording wins over Ottawa last Saturday and St. Louis on Tuesday night.

Thursday will be a homecoming for 29-year-old center Lukas Sedlak, who was selected in the sixth round of the 2011 NHL Draft by Columbus. He played his first three NHL seasons with the Blue Jackets.

Sedlak scored a key goal in Tuesday’s 5-1 win over the Blues after it appeared St. Louis was establishing momentum. The goal was Sedlak’s first since Feb. 18, 2019.

“We ended up sitting on our heels a little bit, and all teams do it when you have that lead,” Tortorella said. “I just liked the way we responded after they scored their first one. Obviously, the fourth is a big goal, but then I thought we checked. We were smart. We just played a simple game blue line to blue line. I just liked the way we were as a team just trying to stay within our concept.”

Felix Sandstrom made 27 saves for Philadelphia to earn his first NHL win in his ninth career game. Sandstrom found out hours before the game he would be starting after Carter Hart was scratched with an illness.

“I know how quick things can change,” Sandstrom said. “I tried to prepare the same way either if I’m playing or not. So, it wasn’t that big of a difference for me. I was fine.”