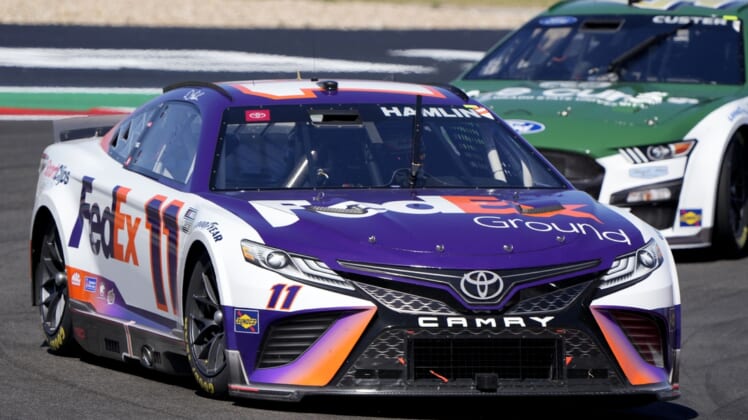 Last week for the first time since he won the 2021 Las Vegas Playoff race, 41-year-old Denny Hamlin hoisted a trophy. He snapped a streak of 12 consecutive wins by drivers under the age of 30 and also put the perennial championship contender Hamlin back on course after a rocky start to the season.

The driver of the No. 11 Joe Gibbs Racing Toyota shows up at the Martinsville (Va.) Speedway as the winningest active driver (five wins) at the half-mile track – and easily one of the most motivated after an uncharacteristically slow start to the year. His win at Richmond, Va. last Sunday marks his only top-10 this season to date.

Hamlin is among the pre-race favorites at +800 by BetMGM – behind only Martin Truex Jr. (+500) and Chase Elliott (+700) and even with Ryan Blaney and Kyle Busch. Hamlin has been backed by 5.4 percent of the bets but only 3.9 percent of the handle.

There is a robust list of traditional annual race winners – from Hamlin’s JGR teammates Truex Jr. and Busch to former series champions Elliott, Joey Logano and Kevin Harvick – still vying for that first 2022 victory. And there’s plenty of reason to make any of them a favorite for this weekend’s race – officially shortened from the historical 500-laps (to a scheduled 400-laps) for the first time in 50 years.

Truex, driver of the No. 19 JGR Toyota, has three wins in the last five Martinsville races and is the defending Spring race winner – taking the victory by a full 1.9-seconds over Elliott and Hamlin last March – despite Hamlin’s race best 276 laps out front. Truex Jr. leads the way at BetMGM with 8.5 percent of the bets placed and 13.5 percent of the handle.

Elliott won in 2020, Logano in 2018 and both brothers Kyle (twice) and Kurt Busch (twice) have victories at Martinsville as well.

As with Hamlin, William Byron, who led late at Richmond (Va.) Raceway last week but was overtaken in the final laps, finished top-five in both Martinsville races last year.

Byron’s Hendrick Motorsports teammate, Elliott, finished among the top-five in the 2021 Martinsville spring race but finished 16th in the Playoff race later in the year. The driver of the No. 9 Hendrick Motorsports Chevrolet’s laps led total (525) in the last three races (including his 2020 Playoff victory) is most in the series during that time. There is plenty of extra mental motivation as well. Elliott, who has advanced to the last two Championship 4 Rounds, is the only member of the four-driver Hendrick team without a win so far this year.

Neither Elliott nor Team Penske’s Ryan Blaney has won this season, however the pair currently are tied atop the championship standings by 19-points over Truex. Blaney has won a season best three pole positions – including the last two – and led a series best 334 laps but a pair of fourth place finishes (at Daytona and Phoenix) are his best showings.

The driver of the No. 12 Team Penske Ford is looking for his first win at Martinsville, although he has an impressive six top-10 and five top-five finishes in 12 career starts – including runner-up showings in both 2020 races. He was 11th in both races last year – leading 157 laps in this Spring race.

Kyle Busch, who finished runner-up to Bowman in last Fall’s race, is another driver with past Martinsville success ready to get in the win column this year. He has a pair of NASCAR Camping World Truck Series wins as well as his two NASCAR Cup Series trophies. He has only a single top-five finish – fourth place at Las Vegas – and has led more than on lap only time in the last four races. Martinsville, no doubt, presents itself as a game-changer for Busch as well.

“There are all kinds of different ways Martinsville has always put on really good and exciting racing and we’ll see how things look with the new car and trying to adapt as best we can,” Busch said.

Busch is third at BetMGM with 9.4 percent of the handle.