Dec 19, 2020; Indianapolis, Indiana, USA; The Big 10 Conference logo is seen on the field during the first half between the Ohio State Buckeyes and the Northwestern Wildcats at Lucas Oil Stadium. Mandatory Credit: Aaron Doster-USA TODAY Sports

Antwi, who was born in Ghana and now lives in Suwanee, Ga., announced his commitment on Twitter in a video.

A four-star prospect, he is ranked by the 247Sports composite as the No. 16 wide receiver in the nation. In the 2022 class, he joins five-star wideout Caleb Burton (Austin, Texas) and fellow four-stars Kaleb Brown (Chicago) and Kyion Grayes (Chandler, Ariz.) 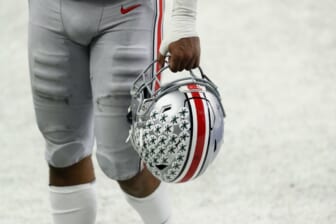 The Buckeyes’ 2022 class is ranked No. 1 in the nation by 247Sports and is headlined by the nation’s No. 1 player, quarterback Quinn Ewers of Southlake, Texas, who will have plenty of targets.

Antwi’s commitment was the second significant one on consecutive days for the Buckeyes. On Sunday, defensive lineman J.T. Tuimoloau of Sammamish, Wash., committed to the Class of 2021 and is expected on campus this week. The five-star recruit, a consensus Top 10 prospect, was the highest-ranked player who hadn’t chosen a school for this fall.