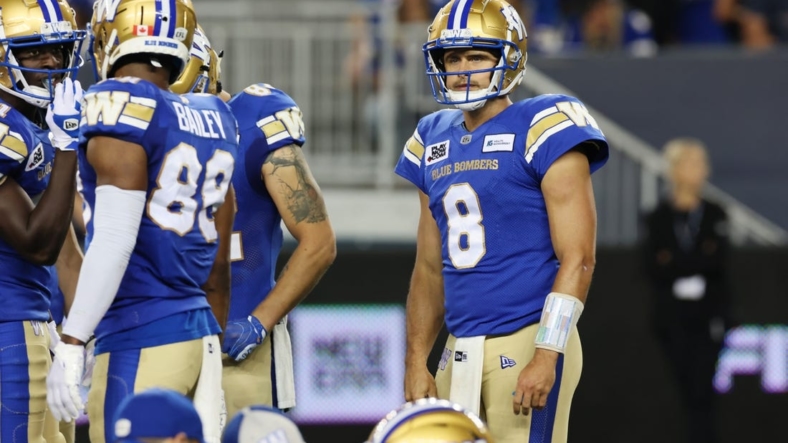 The Winnipeg Blue Bombers will be out to become the first team this season to clinch a CFL playoff spot when they visit the Saskatchewan Roughriders Sunday at Regina.

Winnipeg (10-1), the defending Grey Cup champion, would reach the postseason for the sixth straight season with a win over Saskatchewan (6-5).

It will be the first meeting between the teams this season, with the next two at Winnipeg on Sept. 10 and 30.

The Blue Bombers are coming off a 31-29 victory over the Calgary Stampeders on Aug. 25 with quarterback Zach Collaros going 19-for-26 in passing for 294 yards with two touchdowns and two interceptions. Nic Demski had eight catches for 117 yards and a TD.

The Roughriders announced Wednesday that coach Craig Dickenson tested positive for COVID-19 but was expected to return to the team Saturday.

The Roughriders have allowed a league-high 44 sacks this season with Fajardo the victim 39 times in the 10 games that he has played.

“You have to realize that our offensive line has no continuity,” Fajardo said. “Every single week it seems like we have a new offensive lineman starting. Once we get those guys feeling good about playing five strong up front, I have all of the faith in the world in them.”

“If we can get to Cody (Fajardo) and make him rush his reads and not be able to find second and third options, we’ll be really good up front,” Jefferson said.

“We have to rush well,” Jeffcoat said. “You have to get to him quick because if he’s able to use his legs and create more plays their receivers are hard to cover.”