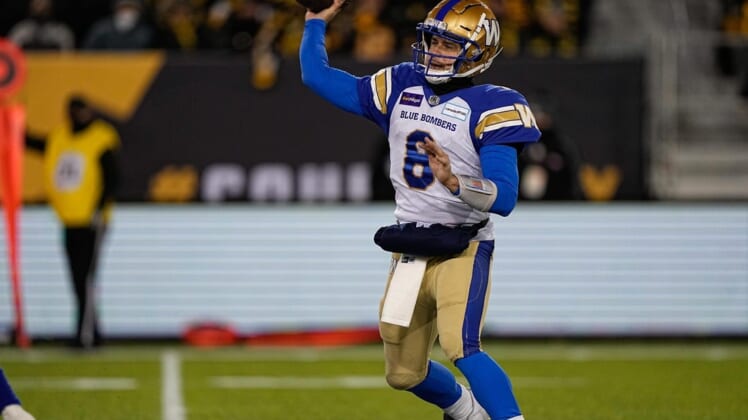 There barely was time for the Winnipeg Blue Bombers to celebrate.

After squeaking out a 23-22 victory Monday night at Toronto when the Argonauts’ Boris Bede missed a convert following a touchdown with 38 seconds left, Winnipeg is back in action Saturday with a late-afternoon kickoff at Vancouver against the B.C. Lions.

The Blue Bombers (4-0) nearly blew a 17-3 lead at Toronto, gaining just 276 total yards and managing just six second-half points. Quarterback Zack Collaros was 25 of 31 in the air, but managed only 215 yards and threw an interception to go along with a touchdown.

“When your defense creates (three) turnovers and scores a touchdown, the game shouldn’t be as close as it was,” Collaros said. “We have to get better.”

The two-time Grey Cup champions haven’t exactly rolled over their opponents despite their perfect record. Their average margin of victory has been 6.0 points. Take out a 26-12 home win over Hamilton on June 24 and that shrinks to 3.3 points.

Meanwhile, B.C. (3-0) has been winning in a different way. The Lions have scored at least 34 points in all three games and their 34-31 win on June 30 in Ottawa was their first close game. They routed Edmonton and Toronto by a combined 103-18 in the first two games.

B.C. accumulated 509 total yards in Ottawa, with rookie quarterback Nathan Rourke accounting for 446 of those. He completed 23 of 31 passes for 359 yards with two touchdowns and two interceptions, while rushing for 87 yards and a third score.

Much of Rourke’s early success has to do with the play of the Lions’ offensive line. Led by right tackle Kent Perkins, B.C. has permitted just two sacks and leads the league in rushing, passing, net yardage, touchdowns and points per game.

“This is a great team,” Perkins said. “You can feel it in the locker room, and you can feel when we go on the road. It’s expected we win.”