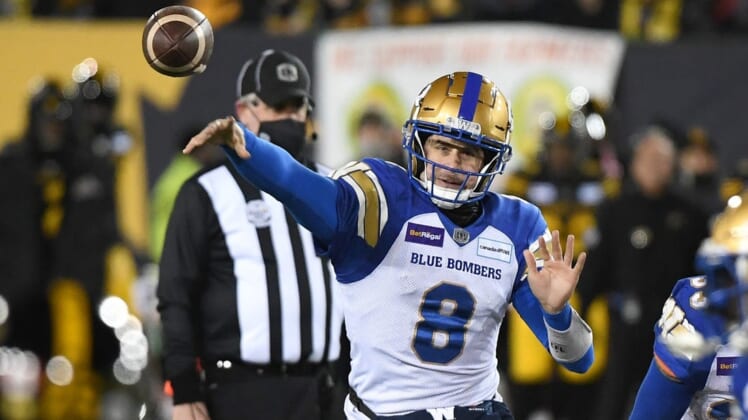 The Winnipeg Blue Bombers will bid to hand a second straight opponent their first loss of the season when they host the Calgary Stampeders on Friday.

The defending Grey Cup champion Blue Bombers (5-0) held a 21-point advantage after the first quarter and cruised to a 43-22 victory over the previously unbeaten B.C. Lions last Saturday.

Zach Collaros completed 23 of 30 passes for 288 yards and three touchdowns for Winnipeg. Two of the scoring strikes went to rookie Dalton Schoen, while the third was reeled in by Greg Ellingson.

“He’s definitely playing like a two-time, back-to-back champion and MOP (Most Outstanding Player),” Ellingson said of Collaros. “It’s fun to watch him play and be on the other end of watching him do those things and catch the ball.

“The guys love him. He’s smart, he likes to communicate and he’s not always about doing everything the perfect way — he likes to freestyle a little bit, which is fun for fans and for this football team.”

Collaros and Schoen (career-high eight catches, 117 yards) were named CFL Top Performers for the week following the Blue Bombers’ win over the Lions.

“Winnipeg showed they’re still on top and that just puts a chip on our shoulder where we have to come in and practice and be focused and understand this game is not going to be easy,” Calgary receiver Reggie Begelton said.

“If we want to prove we’re here to stay, this is going to be a statement game for us.”

The Stampeders (4-0) already made a statement with a resounding 49-6 trouncing of the provincial-rival Edmonton Elks last week.

Calgary is bidding for a 5-0 record for the eighth time in franchise history and first since 2018.

The Stampeders will hit their second bye in four weeks following this clash. They will then host the Blue Bombers on July 30.