Blockbuster Devin Booker trade to the Knicks? Not happening 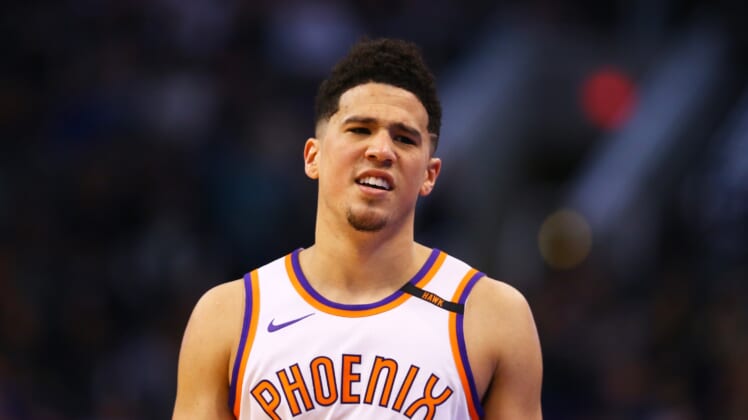 A report surfaced earlier in July that New York Knicks first-year president Leon Rose will attempt to make a play for Phoenix Suns star guard Devin Booker in a trade.

Despite the new front office leadership, it seems that New York is still attempting to acquire the unattainable after last summer’s failed courtships of Kevin Durant and Kyrie Irving.

This latest note suggests that the Knicks are aiming for an unlikely target.

“Is a trade for Booker realistic? I asked one opposing executive for their thoughts and they sent back a straightforward reply: ‘LOL,'” SNY’s Ian Begley noted recently.

The Knicks’ insider provided multiple reasons why any trade for Booker is extremely unlikely.

“The reason that this is such a long shot? Booker is under contract for the next four seasons,” the report read. “The closer a player gets to the final year of his contract, the more leverage he has to force a trade. Let’s assume that Booker wants to leave Phoenix and get moved to New York. Because he has four years remaining on his deal, there doesn’t appear to be much Booker can do to force Phoenix to make a trade.”

Devin Booker’s contract doesn’t give him much leverage

The 23-year-old former lottery pick signed a five-year, $158.3 million max extension with Phoenix back in July of 2018. He’s under contract with Phoenix through the 2023-24 season.

Even if Booker were to request a trade, the situation is much different than, say, Anthony Davis when he requested to move on from the New Orleans Pelicans following the 2018-19 season. Davis had only one more year on his contract.

Devin Booker is a foundational piece with the Suns

Phoenix will resume the 2019-20 season at Walt Disney World on July 30 after a four-plus month hiatus. The team sits at 26-39 on the season and has an outside shot of earning a playoff spot.

Though, there’s reason for optimism in the desert. Deandre Ayton has morphed into an elite star from the center position. Kelly Oubre has performed well after a trade from the Washington Wizards. The Suns have key pieces in place to contend moving forward.

The other important aspect to look at here is New York’s lack of trade assets. Outside of R.J. Barrett, there’s not much that would be of interest to Phoenix.

Rose and Co. might be looking to move on from former lottery picks Kevin Knox and Frank Ntilikina. In no way will either player be a central piece in a blockbuster trade of this ilk.

Knicks fans are pining for a relevant product inside Madison Square Garden. However, chasing after someone like Booker makes no sense. Simply put, it’s not happening.