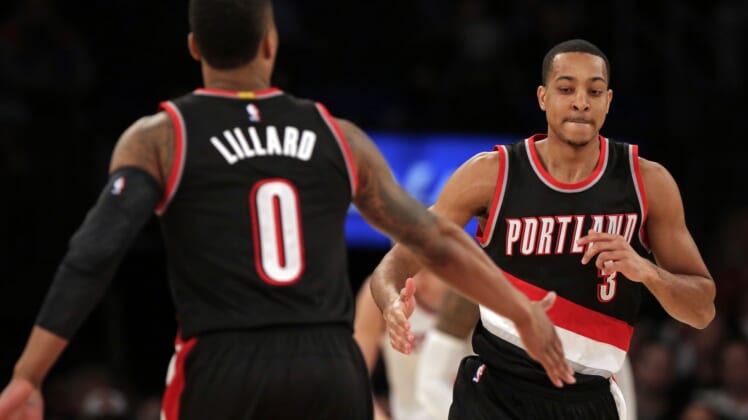 The Golden State Warriors are up 1-0 in the Western Conference Finals over the Portland Trail Blazers heading into Game 2, which takes place Thursday night.

The big picture: The Warriors blew out the Blazers in the first game with a dominant 39-point fourth quarter to win by 22 points. Can Portland somehow rebound and steal a game in Oakland?

Heading into this crucial test, we’re providing some bold predictions for Blazers-Warriors Game 2.

Lillard and McCollum both score 25-plus

Heading into Game 1, we predicted that McCollum would hit the freezer after lighting up the Denver Nuggets in Game 7 of Portland’s previous series. He did scrounge up 17 points but was a brutal 7-17 from the field while the Blazers went minus-20 with him on the court.

Not only will McCollum bounce back with a strong shooting night, he’ll be joined in this endeavor by backcourt teammate Damian Lillard. This Oakland native failed to get going on Tuesday as well, hitting just 4-12 from the field en route to 19 points. Both of these talented players will score 25 points or more to give the Blazers a fighting chance.

Steph stays deadly from outside the arc

The left hand is just fine, folks. Though Curry is almost certainly still dealing with discomfort following his dislocated finger, he’s shrugged the injury off in a big way the past six quarters. Since putting up a goose egg in the first half of Game 6 against Houston, Curry has scored 69 points.

In Tuesday’s opener against Portland, Curry was outright spicy from outside the three-point line, going 9-15 in a 36-point effort. We predict he stays hot from behind the arc, hitting at least seven threes en route to his third straight 30-plus-point game.

Seth bounces back with 15-point effort off the bench

Steph was the only Curry who made a positive impact on Game 1. Seth Curry had a brutal first game going against his older brother in the conference finals. Coming off the bench, he provided no tangible spark offensively, shooting 1-7 from the field while scoring just three points in 19 minutes of play.

Curry will shake off the nerves and provide a big boost off the bench in Game 2, scoring at least 15 points while continuing to be a pest defensively.

Klay Thompson has run hot and cold in the playoffs. Either he’s hitting bulls-eyes or he’s putting on a volume clank show. This Splash Brother has been hot for three games straight, scoring 27, 27, and 26 points respectively.

He’s going to hit the cooler in Game 2 and struggle to reach 15 points as his outside shot fails him. Thompson is always valuable and will continue to be even as he struggles to score, thanks to his defensive prowess. But as we detailed earlier, we expect the Portland backcourt to have a huge game, regardless. This leads right into to the final point.

The Blazers have outstanding balance offensively. Even in Game 1’s defeat, five players scored double-digit points, with Rodney Hood showing up big off the bench.

Without Durant, on a night where Thompson struggles to score and the Blazers get big-time production from their two starting guards, we expect Portland to steal a victory on the road and make this a series.