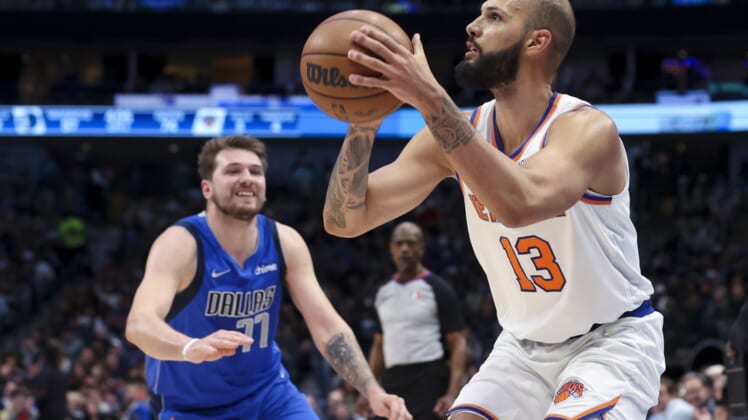 The Portland Trail Blazers and New York Knicks share similar records, but they mean different things in the race for a play-in spot in their respective conferences.

Despite being on the verge of officially clinching their first losing 82-game season since Damian Lillard’s rookie year in 2012-13, the Blazers are in the mix for the final spot in the Western Conference as they attempt to improve their positioning Wednesday night when they visit the fading Knicks.

Among the reasons for Portland’s struggles is Lillard’s absence. He played 29 games before undergoing abdominal surgery and Portland is 13-19 since his last appearance on Dec. 31.

Portland’s record has plummeted to 26-41, but in the West that means the team began Tuesday 1 1/2 games behind the New Orleans Pelicans. Portland is 1-7 in its past eight games, and Monday’s 122-113 loss in Atlanta was the first by single digits in this skid.

The past four games have seen Portland take the floor without Anfernee Simons, who is sidelined with a left knee injury. Without Simons, the Blazers blew a 15-point lead and could not stop Trae Young, who scored 46 points on their defense, which actually held Atlanta to 36.7 percent from the field.

“We fought like crazy and I was proud of that,” Blazers coach Chauncey Billups said. “We gave ourselves a chance to win the game. Our guys fought and I loved it.”

Billups can be proud of recent efforts by Josh Hart, who followed up a 44-point showing in Saturday’s 127-118 win over the Washington Wizards with a 31-point performance.

Losers of 13 of their past 17 games, the Knicks are two losses shy of clinching a losing season after winning 41 games and earning the fourth seed in the East in coach Tom Thibodeau’s first season. New York is holding flickering hopes in the play-in race as it is 5 1/2 games behind the Charlotte Hornets for the final play-in berth.

The Knicks own nine blown double-digit leads, including a 23-point edge on Feb. 12 when Portland stormed back for a 112-103 victory. The Knicks were outscored 35-11 in the fourth quarter at Portland when Simons scored 30 and Hart added 23 against them.

New York blew another double-digit lead Friday in Memphis when it squandered a 15-point edge and saw a three-game winning streak halted. The Knicks followed it up with Sunday’s 110-107 loss to the host Brooklyn Nets when it allowed a 53-point game to superstar Kevin Durant, who hit the tiebreaking 3-pointer in the final minute over RJ Barrett.

Julius Randle scored 26 points Sunday and is averaging 27.6 points over his past seven games. Evan Fournier added 25 but also committed a costly turnover in the final minute and realizes how dire the playoff situation is for New York.

“Slim, obviously, the odds are against us,” Fournier said of the postseason chances. “That’s exactly what I mean. I think we aren’t looking at the schedule or the (standings), and we’re just going one game by one game, trying to be in the moment and trying to make the most of the opportunity, but we need each and every game and that’s why losing those games is frustrating.”