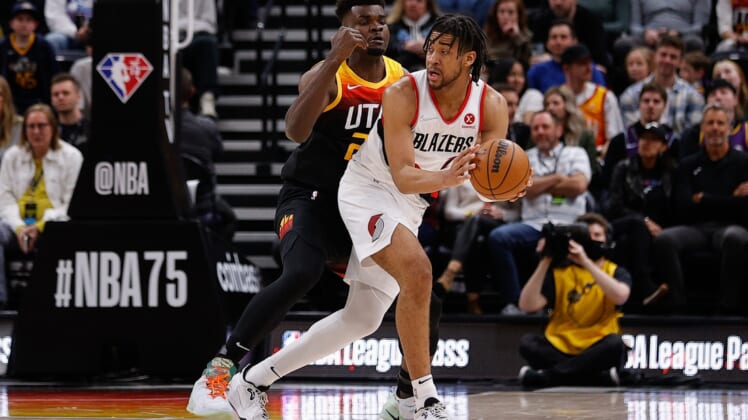 They’ll look to salvage the finale of a five-game trip at the Detroit Pistons on Monday night.

Portland has dropped eight straight away games, including the first four of the current swing. Indiana pounded the Blazers 129-98 Sunday in the first game of a back-to-back.

“They did a good job of pushing the pace, pushing the tempo,” Blazers coach Chauncey Billups said. “They got themselves in a rhythm pretty early, and we could just never stop them. You’ve got to give them credit, but it wasn’t our best effort.”

Billups will coach against the team where he made his biggest impact as a player. He was the NBA Finals’ Most Valuable Player for the Pistons in 2004.

The Blazers are closing in on the finish line with several key players — including Damian Lillard, Jusuf Nurkic and Anfernee Simons — sidelined by injuries.

They have struggled with makeshift lineups, losing 10 of their last 11. Portland has given up at least 120 points in all of its losses during the slide.

They committed 18 turnovers against the Pacers, who turned them into 24 points. Indiana led 69-48 at halftime.

His team will have to push through one more road game before beginning a five-game homestand.

Josh Hart led the Blazers on Sunday with 26 points. He’s averaging 28.6 over the last five games.

The Pistons have lost five of their last six games. They wrapped up a three-game trip with a 113-109 loss to the Cleveland Cavaliers on Saturday.

Jerami Grant had a season-high 40 points, but Detroit squandered a 12-point, second-half lead, in part because of a makeshift second unit. A trio of the Pistons’ rotation players sat out due to injuries.

“I thought we had a good 42 minutes of basketball on both ends of the floor,” Pistons coach Dwane Casey said. “When we’re in playoff mode, we probably would’ve handled our rotation a little differently. But we’re still in development mode, evaluation mode, and that’s where we were (Saturday).”

Saddiq Bey, who erupted for 51 points in a win at Orlando on Thursday, added 20 points, but the team’s reserves were outscored by Cleveland’s bench 43-20.

The Cavaliers have 41 wins after going 22-50 last season, and the Pistons believe they can do something similar next season. Grant is the only player in the lineup who is not a rookie or second-year player.

“With the skill and the talent that we have, we definitely can get there,” Grant said. “We have all the tools that we need. We’ve just got to put it together and gel and make it work.”

Monday’s game will begin a four-game homestand for the Pistons. They’ll also face Atlanta, Washington and New York during that stretch.

They lost to Portland in the first meeting 110-92 on Nov. 30. CJ McCollum led the Trail Blazers with 28 points. He was traded to New Orleans last month.