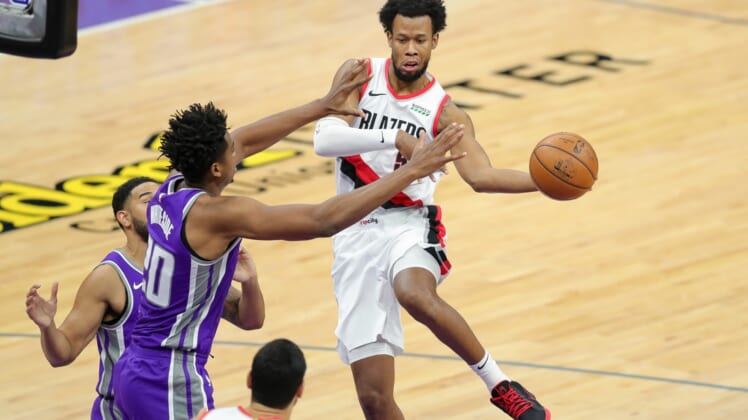 The Portland Trail Blazers received an unexpected but welcome break this week, and figure to be fresh and rejuvenated Sunday night when they host the New York Knicks.

Portland’s scheduled games on Wednesday and Friday against Memphis were postponed due to COVID-19 issues for the Grizzlies. So, Trail Blazers coach Terry Stotts saw an opening to refine some things in practice and tinker with player rotations.

“Between getting extra rest and extra reps, the practices have been good for us,” Stotts said. “It helped. There is no question that having extra time to work on things on both ends — we need to adjust. Different guys will have different roles. From that standpoint, missing these two games was good for us.”

The 29-year-old had stepped up his game this season and was off to a superb start. He was averaging a career-high 26.7 points in 13 games before sustaining the hairline fracture in his left foot against the Atlanta Hawks on Jan. 16.

Seldom-used Rodney Hood will be asked to soften the loss of McCollum. Things went well on Monday against the San Antonio Spurs when Hood scored a season-best 21 points on 9-of-14 shooting in 25 minutes.

Hood figures to stay in the starting five as Stotts would prefer to continue bringing sharpshooter Gary Trent Jr. off the bench.

That is definitely appealing to Hood, who is hoping to find his rhythm after scoring just 18 points all season prior to Monday.

“I feel like I got off to a better flow, just being in the game,” Hood said. “Sometimes when you come off the bench, you never know when you coming in.

New York is 1-1 during a four-game road excursion that continues through Tuesday against the Utah Jazz in Salt Lake City.

The Knicks posted a 119-104 win over the Golden State Warriors on Thursday before falling 103-94 to the Sacramento Kings the following night.

New York scored just 40 second-half points in the loss to Sacramento. The Knicks moved within two points with 4:30 to play before the Kings put the game away with an 11-2 burst.

The disappearing act down the stretch left coach Tom Thibodeau in a sour mood.

“Obviously we didn’t finish well,” Thibodeau said. “I did like the fight in the fourth quarter to come back, but we didn’t close it out. It’s hard to win on the road if you’re not doing all the little things. The games keep coming. We have to improve.”

Julius Randle contributed 26 points and 15 rebounds in his latest solid performance. The 26-year-old has registered four consecutive double-doubles and is averaging 20.8 points and 15.3 rebounds during the stretch.

Randle was miffed with the loss to the Kings, which followed a three-game winning streak.

“This was a weird, weird game for us,” Randle said. “We started off slow, worked our way out of it and was up at the half. The third and fourth quarter was a little bit of a funk. I don’t even know what happened. The ball stuck a little bit.”