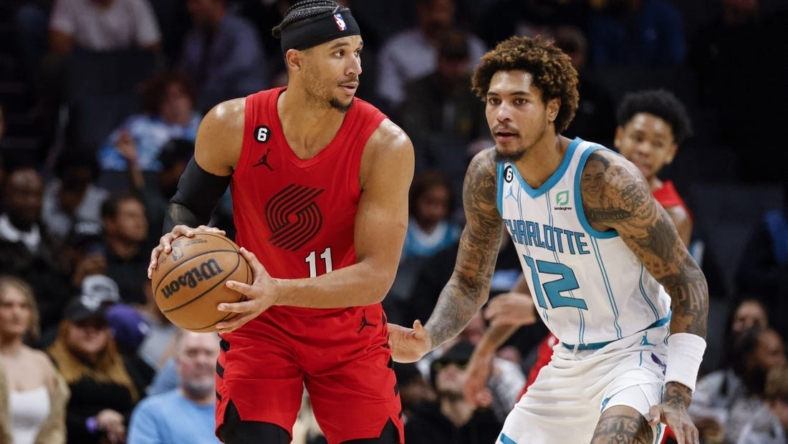 The Portland Trail Blazers are in the midst of a very successful road trip, while the New Orleans Pelicans are just glad to be back home for the first time six days.

The Blazers are off to a 3-1 start on their six-game trip and will look to improve upon that mark when they visit the Pelicans on Thursday night.

Damian Lillard overcame a sluggish start to score 26 points, making six 3-pointers, in a 105-95 victory at Charlotte on Wednesday night.

“Not having them out there makes us pretty small,” Lillard said. “That puts us in a position where we might be vulnerable against a team that is always crashing the boards. So they hurt us with that. But we never stopped competing.”

Lillard was scoreless in the first quarter, but scored 14 points in the second to help the Blazers grab a five-point halftime lead.

The Hornets began the third quarter with a 19-2 run, but Lillard scored 11 points during an 18-2 run that put Portland in control.

Lillard will face former teammate CJ McCollum for the first time Thursday night. The two guards were teammates for 8 1/2 seasons before the Blazers traded McCollum to the Pelicans in February. Lillard was hurt for both matchups last season after the trade.

“It’s weird because I have never played against CJ unless it was practice,” Lillard said. “Just seeing him in a different uniform is weird enough. Playing against him is going to be even more different.”

Lillard said him and McCollum spoke Tuesday, but didn’t discuss the impending confrontation.

“I’m sure he is still going to take it personal to play against us and want to win this one,” Lillard said.

One of McCollum’s teammates, Brandon Ingram, looked like he really wanted to win Wednesday night.

After losing at Atlanta and Indiana, New Orleans avoided a winless trip by defeating the Bulls 115-111.

The Pelicans made just 3 of 19 3-pointers, but Green stressed to his players to keep playing sound defense and to drive to the basket and get to the foul line.

“Coach emphasized that we couldn’t let our defense be dictated by our offensive game,” forward Herbert Jones said. “I feel like (Wednesday) was a prime example of what he wanted us to do.”

The game against Portland begins a six-game homestand for New Orleans, which has played just three of its first 11 games at home. After a 122-121 overtime loss to the Jazz in their home opener, the Pelicans have since beat the Mavericks and Warriors.