Blake Wheeler delivers for Jets in shootout win over Sabres 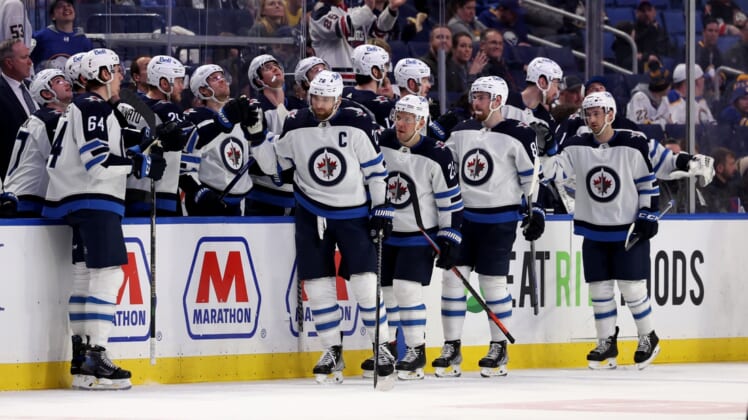 Blake Wheeler scored in regulation and added the decisive goal in the third round of the shootout to lift the visiting Winnipeg Jets to a 3-2 victory over the Buffalo Sabres on Wednesday night.

Pierre-Luc Dubois and Mark Scheifele scored in the first two rounds, while Victor Olofsson and Alex Tuch answered in the second and third rounds for Buffalo. That set up Wheeler, who buried his chance against Craig Anderson (25 saves) to send Winnipeg to its third straight victory and ninth in its last 12 games.

Mason Appleton scored in regulation and Connor Hellebuyck made 35 saves while making his franchise-record 363rd career start for the Jets.

Winnipeg played without star forward Kyle Connor and defenseman Nate Schmidt after the pair was placed in COVID protocol prior to the game. Connor and Schmidt will be required to stay in the United States for five days, thus missing the Jets’ road game in Toronto on Thursday and home game versus the Los Angeles Kings on Saturday.

Anderson preserved a 2-2 tie after denying Dubois on a breakaway with 7:21 remaining in the third period.

Girgensons regrouped after his initial shot was blocked and wired the puck from the slot past Hellebuyck to open the scoring with 5:21 in the first period.

Wheeler, however, turned the puck over in the neutral zone over four minutes later, leading to Girgensons deftly backhanding a shot past Hellebuyck. The two-goal performance was Girgensons’ first since he accomplished the feat versus the Florida Panthers on Nov. 24, 2019.

Appleton answered by wiring a shot past Anderson with 21 seconds remaining in the second period. Appleton’s goal was his seventh of the season and his first since returning to the team via trade.