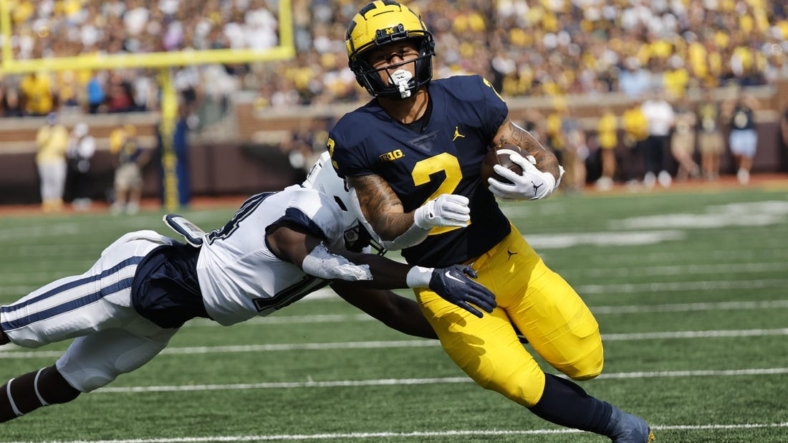 Blake Corum scored five rushing touchdowns, four in the first half, and No. 4 Michigan overwhelmed UConn 59-0 on Saturday in Ann Arbor, Mich.

Corum tied school records for rushing touchdowns in a game and in a half. He finished with 71 yards on 12 carries for the Wolverines (3-0) as they wrapped up their non-conference schedule.

J.J. McCarthy, named the team’s No. 1 quarterback after last week’s win over Hawaii, completed 15 of 18 passes for 214 yards. Ronnie Bell led the receiving corps with seven receptions for 96 yards.

A.J. Henning added a 61-yard punt return for a touchdown.

True freshman quarterback Zion Turner completed only 4 of 16 passes for 17 yards and rushed for 42 yards on seven carries for the Huskies (1-3).

Michigan held its opponent scoreless in the first half for the third consecutive game while racing to a 38-0 lead.

It took just over two minutes for Michigan to grab the lead as Corum scored on a 20-yard run. McCarthy completed a 38-yard pass to Roman Wilson during the possession.

Corum scored on a 1-yard plunge later in the quarter, completing a 54-yard drive.

Following a UConn fumble in its territory, Michigan kicker Jake Moody made a 26-yard field goal before the quarter ended.

A blocked punt gave Michigan the ball on the Huskies’ 18-yard line early in the second quarter. Corum scored from a yard out three plays later to make it 24-0.

Henning broke numerous tackles while returning a punt 61 yards for the Wolverines’ next touchdown. Corum capped his big first half with another 1-yard run with 3:11 remaining.

Corum scored his fifth touchdown on an 11-yard run up the middle during the third quarter.

Alex Orji scored on a 10-yard run in the fourth quarter.

Alan Bowman completed a 20-yard pass to Leon Franklin for the final touchdown.

Michigan has won all three head-to-head matchups with the Huskies. The Wolverines will begin their defense of the Big Ten championship with a home game against Maryland on Saturday. UConn will play another road game at NC State.